So I've been really busy working on zcl again, porting it to the foreign-abi branch of project panama.

Well that's after I ruffled some feathers on the mailing list, I guess I just have strong opinions on C, but I thought I'd better put my money where my mouth was before upsetting anyone too much. To be honest the Oracle engineers have been the most polite and overwhelmingly patient of all the projects I've interacted with lately - guix guys just weren't very polite (that's not entirely fair, some were nice), the google guys for clspv were just condescending, and well the ffmpeg devs never did reply to my patch for a kinect indev.

Anyway back to the topic at hand. I wrote a fairly rushed but quite detailed overview of the issues I came across and some of the features I implemented or needed to change. I titled it JNI to Java with project panama. The prose doesn't flow very well but at least I ran it through ispell which is a habit I'm trying to get into. 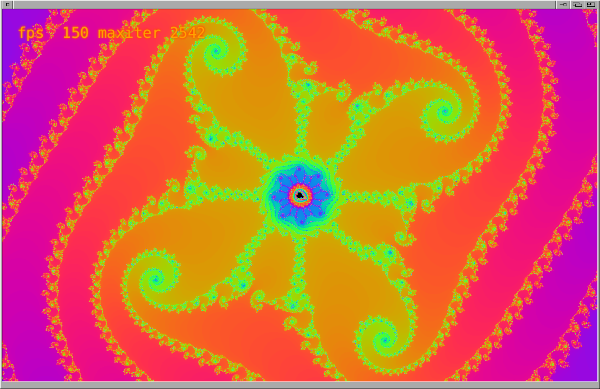 Although it crashes after a few minutes from what looks like a big leak in the OpenCL runtime.

I was originally just going to put into a readme in project panamaz but since I got so far with the development I just published it separately and created a new branch foreign-abi in the zcl repository. The article above has some checkout details about checking it out. It's still work in progress and I'm still making some internal changes but I added a fun little Mandelbrot zoomer to it. The javadocs are pretty shit but for what it's worth I've uploaded those too and will try to keep them relatively up to date while I work on it.

I'm also using the project to experiment with the maven and junit, and now a demo-runner snippet for GNU Make.

It was sort of because I was working in the panamaz project but I wrote almost all of this new code in emacs rather than netbeans. Damn I knew it pissed me off but I didn't realise it wasn't writing Java that was the problem, netbeans keeps just fucking getting in the way when you're trying to write code and those interruptions constantly break you out of 'flow'. I mean the completion and the real-time syntax checking is pretty good but I don't know why the editor has to be such an annoying prick all the time.