So I got my new pc bits yesterday and put them together. It's just sitting 'open bench' at the moment with an old HD5770 as the gpu. 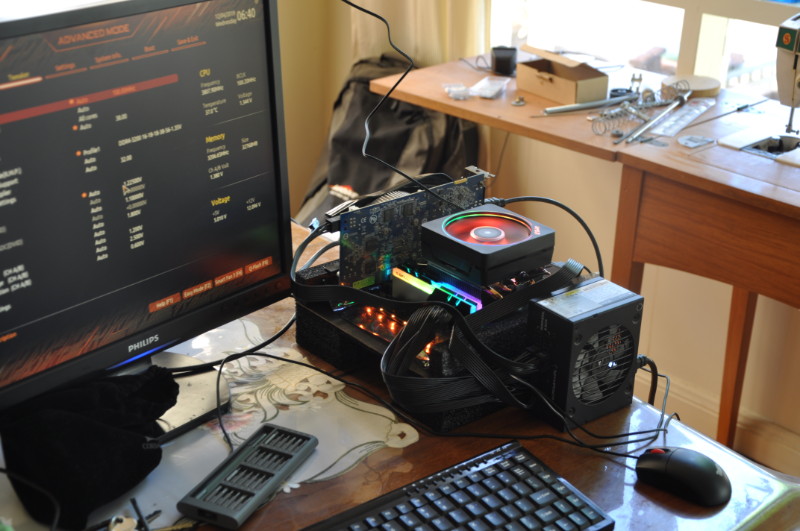 I thought I might try a different GNU distribution, i'm pretty sick of ubuntu and well systemd is a load of shit so I wanted to try others. Last time I got a new machine i set it up with the same config as my work machines (ubuntu 16.04), but I don't want this to have anything to do with work.

I also ordered a couple of 24" 16:10 1920x1200 monitors. I don't really like monitors bigger than that and one just isn't enough. Maybe I should've gone for 4K monitors but I didn't. They haven't shipped yet but fingers crossed I get them by the end of the week.

Artix is a systemd-less arch. I managed to get it up and going but it just didn't feel great. It asks too many questions about what to install (e.g. xfce4 has about 20 sub-packages, I have no idea what i need) and the defaults are really pants. xterm is almost unusable. The install documentation misses a few steps which result in broken systems. And actually I forgot to install jfs-utils so it broke after a power cycle anyway. Sigh. Well it's not like I don't forget to install jfs-utils on other distributions as well, but I just couldn't be fucked fixin it this time.

A bunch of stuff in artix is from gentoo so i gave that a good look, it's got some interesting features. But I dunno, I didn't even try to install this one after further thought it just seemed like too much hassle - I don't really want to maintain my own distro which is basically what it amounts to.

The gentoo documentation is pretty odd, it obviously originated many years ago but is also written from the perspective of someone who has never used linux at all.

I tried installing guix. I actually managed to find a way to create a bootable image with a standard kernel (that linux-libre thing just wont cut it), and got it booting. And then it all fell down - it has zero support for jfs, which is the only filesystem i will use after being burnt by others. Given it took most of a day to find that out i'm pretty pissed off, and would probably be more pissed off it i literally had anything better to do while my hip heals.

I find the guix documentation ... poor as it effectively assumes you already know how to use it. It's also hard as fuck to explore anything due to the long paths and the inability to just edit things like syslog.conf.

It's also almost impossible to find anything about guix on the internet - using duckduckgo it basically ignores "guix" if it's supplied (even in quotes), and google is barely any better. Makes them both useless.

I was hoping for more, but maybe i'll try it in virtualbox later on.

For anyone interested, to get a standard kernel installer I started here: Installing GUIX on a NUC but the boot image config.scm shown didn't work. Instead I found (using find???) an install.scm I presume from the nonguix channel. On my system it was in /gnu/store/pis1cw2b6zx0m5hwilq8n7bi52ackiwn-nonguix-ecf5742/nongnu/system/install.scm

So now i'm downloading an install image for slackware64-current and will give that a go. Hopefully the kernel is new enough.

Update a little later: Well that went fairly easily. I just installed everything and and am pruning bits and pieces away that I don't need like bluetooth and printer applets, networkmanager, pulseaudio and so on. I'm using wireless for the moment but it's hardcoded in wpa_supplicant.conf easily enough. Packages seem pretty up to date and the pure-alsa-system stuff in extra is a nice touch.

I'm trying KDE as a desktop this time. I don't think i've ever used it before. It's got some weird shit but i've managed to get the window manager to be almost right, if a bit fugly.

One thing in general the 'wraith prism' heatsink which comes with the 3900X is a little under-specced. It doesn't have enough thermal mass so the fan ramps up rapidly all the time. Oh well so be it. The machine certainly feels snappy but the nvme drive probably helps a lot there.

Now I just gotta find something to do with all those threads.