My cat died sometime in the last few weeks. 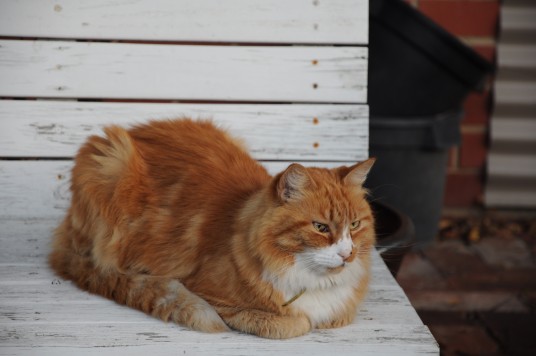 He was acting a bit strange and sore for a while. I later found out my nephew had stepped on him - looking at his fucking phone no doubt. But following that he did seem to recover - he wasn't quite himself but he didn't seem to be bothered by anything as such. Then one day he stopped turning up for food and I haven't seen him since. However I started to smell dead-animal from a spot he used to sleep in. Unfortunately (or perhaps fortunately) I can't get to where it is - deep under a low deck - so I just have to wait for the flies and bugs to do their work. It's also right next to the loungeroom so it's a bit unpleasant depending on the weather.

Work has been slow for a few months - partly my mood, partly the work, and significantly the countract hasn't been renewed. There's still some money remaining but it's running out. The org is just being funny about contractors, they'd rather deal with multinationals who fleece them and the country than with local businesses.

Not that I really care, barely been doing 2 days/week of work and i'm still earning enough to blow way way too much at the pub. At least those 2 days have been solid lately, customers are super-happy with everything. The weather is slowly improving but still has a ways to go to be beer drinking weather, not that it's stopped me so far. The the weird bloke in a kilt that hangs around a certain pub. Hmmm.

Nephew is pissing me off by just being here (i'm still not sure how annoyed i should be with him over the whole stepping on the cat thing). He was only supposed to be living with me for a couple of months while he prepared the paperwork to go into the army after emigrating from The Philippines but he decided to do an apprentiship instead and he's been here over a year now. Mostly nothing major but it's the little things like having to clean the stove up to use it every time he's used it before, stack the dishwasher properly, remind him to do things, and well just having someone else banging around the house. His old man is visiting this week so hopefully I can find out when he's moving out.

I've been lazy lazy for months but I finally did a few things on the garden and around the house - pruning, mulching, weeding, clearing up piles of wood. Build a short staircase from the deck to the ground (one day to be paving). A few days here and there of warmer weather helped.

My mood has continued to be pretty flat for the most part, and worse than that every now and then. Often but not always sleep related - i'm always tired but sometimes more tired than others. I have to stop reading the news and forums - the world is just so fucked up and so are too many of the people in it. Every time I read about big corps or politicians I just want to go drink (or just sleep).

Not playing games much but when I do it's usually No Man's Sky. I think the game design is getting a little unfocused but it's still an ok way to blow a few hours now and then. I really dislike the new sentinal timeout mechanics though.

Looking at building a mini-ITX Ryzen machine but just can't decide on bits and pieces. APU or 2700x+small GPU? I started building a small case by hacking away at a bigger one (approx 200x400x400mm -> 200x200x200mm) but that's still work in progress.

As an ongoing thing i've been poking around a start-up that's looking at doing some machine vision/learning/artistic stuff, but i'm just not certain I can commit to it and I just haven't been coding much outside of work. It has the potential to be a whole heap of fun but it just hasn't grabbed me so far.