I made some chocolate cakes. 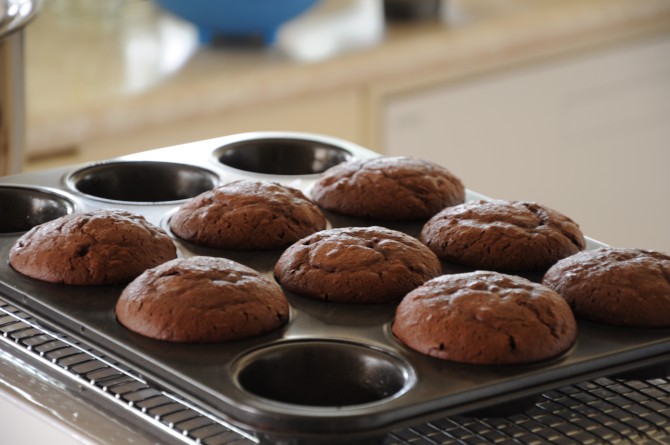 They have 2 fresh Habanero chillies in them, so they're quite potent. I also undercooked them a bit but they can be salvaged with a few minutes in a toaster oven. As I have no one to eat them with i did a half-batch and froze most of them.

I also had a 3k pork forequarter that had been in the freezer a bit too long so I took that out and spent a couple of days cooking different things with it.

Sliced some up with some skin on, marinated them in something jerk-ish, and put them in the vertical grill; basically spare ribs. I used the marinade again on a the hock overnight and then long-roasted that the next day. Got a few nice sandwiches out of that.

Baked some bread for said sandwiches; well bread-maker baked. I throw in some Bulgar wheat and linseed to make it a bit more interesting.

Diced a lean cut and made a masaman curry with it; I had intended to make a green curry but the shops were closed and that's all I had. I froze most of that because I had too much other food. It could've been better but it's ok.

Then I took the meaty bones and a bunch of other bones i'd been keeping for the purpose and pressure cooked the lot for 2.5 hours. I sloughed the meat off the bones, added lots of chillies, some tomatoes, garlic, spices, soup powders, stock powders, soy sauce, fish sauce, lemon basil; and made a super-spicy pork soup out of it. 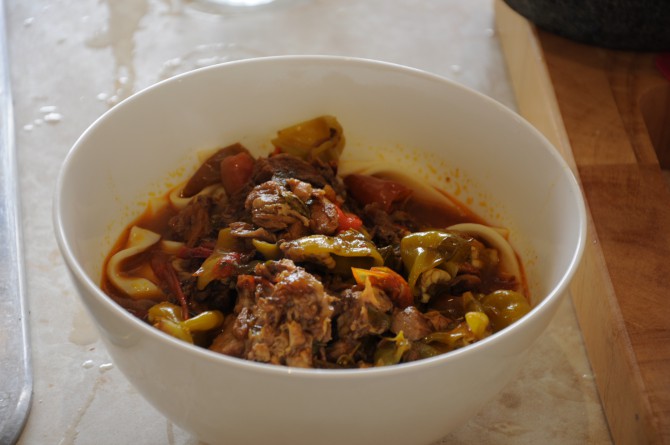 It's super-hot! And very fatty so to be consumed in small amounts. I made the noodles for this bowl too of course. Because the mixer bowl was occupied I first tried making the noodles by hand but failed miserably; didn't add enough water, but then I freed up the mixer bowl and finished the job.

The mixer bowl was busy because I also made some hot-cross buns and the dough was still rising. 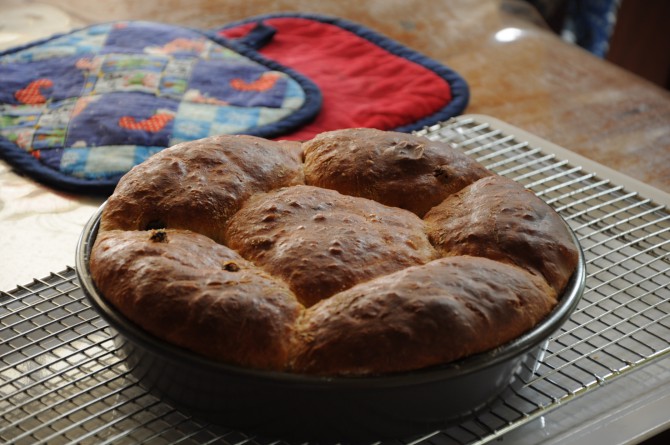 Without the xtian symbology of course. The recipe I had seemed to have far too little water so I added more but the resultant texture doesn't seem quite right. I think i overcooked them a bit and maybe let them rise a bit too long as it's a bit light and dry inside but the holes are small and evenly distributed. I also added much more spice, a little golden syrup and chocolate pieces as well.

I have these strange chilli plants I got seeds from mum and I was curious as to which variety they were. This morning I did some searching and found out; Aji Orchid, aka Peri Peri, Bishops Crown, or many other common names.

I've got quite a few of these growing and as they are cross pollinated seeds they are all a bit different - shapes vary quite a bit and so does their heat from almost nothing to enough to notice. They are tall thin plants. A couple of the bushes I have are over 6' high now and still seem to be growing upwards. But I've had a lot of problem with Eggfruit Caterpillars (my best guess) this year, so much so that i've not managed to get any ripe fruit yet; well and I keep eating them before they get that far.

Anyway I still had a day to burn through so I looked into pickling some. I found a reference on pickling brine concentrations (beyond 'add salt'), found a lid that fit a lidless jar I had and made an airlock out of an empty pill bottle I suddenly have lots of. Then picked some chillies and cut them up. 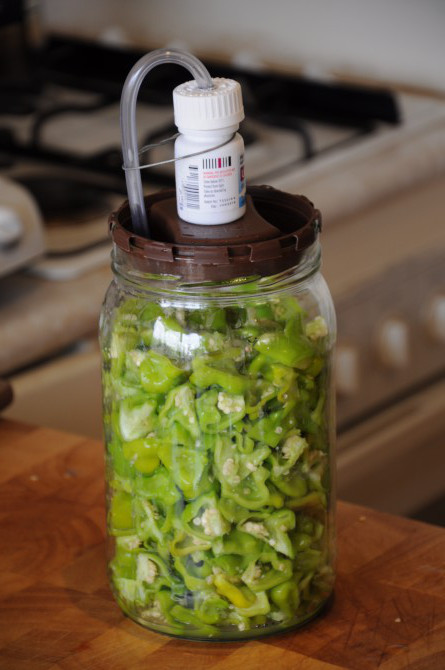 I waited to see how much water would come out on it's own - as I expected not much at all so I topped it up with 500ml of 7.5% brine and inserted a jar to keep them submerged, sealed it up and put it in the cupboard to be forgotten about for a while to let them ferment in peace.

I then got out in the garden and did a rush job setting up some furrows and seeding some wintery things in one garden bed. I planted some snow peas but the rest was a medley of seeds I just threw around; bugs always seem to eat my winter vegetables so it's not worth the effort but who knows it might work this time. I think I used broccoli, chinese cabbage, brussel sprouts, and lettuce.

And then I dug a big hole and moved a lime tree from a half-wine-barrel into the ground. I was surprised at how much the roots had filled the whole barrel but otoh it didn't seem root bound either. Once it was out of the pot I managed to lift the whole thing in and out of the hole so despite watering regularly the dirt wasn't holding any of it but I knew that anyway from the state of growth and lack of fruit. I'm sure my back will be a bit sore tomorrow.

Over the last 4 days I also played a good many hours of Bloodborne and other games. I'm stuck again in Bloodborne - Micolash, Martyr Logarius, or Lower Pthumeru Chalice (Rom again). I'm starting to get a bit sick of grinding (i'm level 105 or something) because i'm just too slow in reactions to be able to get through some parts without it. I'm about 100 hours in anyway which is pretty much my limit with any long game. Maybe i'll keep playing.

I also played some DRIVECLUB in memorial of Evolution Studios being shut down. Why a game of such high quality and depth didn't sell well is beyond me but it's a bit of a bummer and hopefully they can find a way to make more driving games in the future as they have always made really special games.

RIP Evolution, the next beer I have is for you guys.

I nipped out to the shops on Saturday morning but otherwise haven't seen another soul since Thursday evening. I had no visitors, nobody called, the friends I might visit are all away for the weekend. At least I got a couple of emails but none from 'regular' friends.

It's all just so pointless isn't it?