So i've mentioned it a few times on here - i've been steadily losing weight since February. It's settled now at about 74kg - in part because it just seemed to stop on it's own and its enough off so i'm no longer trying to actively lose weight. It is surprising to me how little food it takes to maintain this so far but i haven't been exercising a lot either.

I'm not sure if the initial trigger was all mental or all physical but in part the shock of getting gout and a full freezer and pantry bereft of 'gout friendly' foods kicked off a period of simply being able to lose weight on whim. I guess I somehow shrank my stomach enough to change how my body detects hunger and once it started I just ran with it - i can't say I tried too hard but I wanted to lose a bit for years. I still get hungry, it just doesn't really bother me like it used to and turn into an overwhelming need to eat. I did a few experiments in the midst to see how little I could get away with and it wasn't hunger that drove me to eat but a sore stomach.

At 92kg I was sadly bang on average for a bloke my age; but that is a lot more than my body can take. Although the belt was the first indication of making progress it wasn't till i broke under about 84kg that I looked (to myself) like I was making any progress; that's probably about when my waist to hip ratio broke under 1.0. After that each kg seemed noticeable one way or another.

I don't feel great or anything, but I would be lying if i didn't say I felt `less shit'. 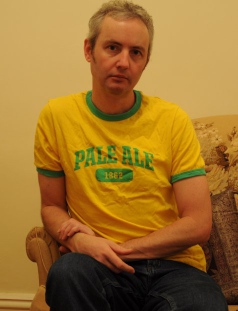 Looking more like a Clark every year (matriarchal ancestry).

A couple of friends (but thankfully not all!) are already saying I "need to eat" like i'm underweight or something. I'm quite some way from that even if i'm below the average these days. I was skinny until I got a job in the city and started having rich lunches and regular Friday drinks together with a shorter commute cycle and it's slowly accumulated since.

The All Fat Diet

SBS has had a series of diet/health related shows on recently and out of curiosity I looked up some of the stuff i've been typically eating.

Apart from a very low total number of joules around 2/3 of the energy was from fats and oils. Protein was low. I think "diet", "light", "lite" and "low fat" foods are complete nonsense so I certainly wasn't having any of that.

Just bread and butter ended up being a big part of what I was eating (and i don't hold back on the butter). A few spuds and some rice at times. Lots of nuts, mostly almonds. Matured cheddar cheese. Lemons and limes as they are in season. Almost no meat, some but not much grog. Lots of coffee (usually black+none) and tea (green, or white+1/4). But I also had what herbs i could find in the garden mostly in tom-yum-like soup, and plenty of chillies and other random stuff along the way (the chillies were important in one critical way beyond making the bland more palatable). Lots and lots of water.

This isn't what I had all of the time but it was in the majority. It's also not something i'll be continuing but it was certainly effective at losing some weight this time.

One thing I did notice is that big dinner means big morning hunger. I'd already noticed this before but i'm now more convinced of it. If you ignore it it just goes away but it's also easy to eat less at night.

A wretched hive of scum and villainy

This episode of gout also enforced just how useless the internet has become as a source of general information. Almost all the gout 'advice' is useless, being generous. Even the stuff from established medical sources wasn't terribly applicable to me due to being neither 70 nor obese.

For example low-fat is always recommended: but it's never specified whether that has anything (at all) to do with gout or merely just being overweight.

Anyway i'm glad I lost the weight, I wonder if it will stay off this time?

Update: Well 6 weeks later and it's still dropping - 72-73Kg now. I'm eating properly now too - probably better than i have for years and certainly not going hungry.

Update: 14 weeks from the first post and it kept dropping slowly - bang on 70kg has been the base for a couple of weeks now. Damn I haven't been this skinny in a long long time and i like returning to it. Except the fucking arthritis keeps coming back. So despite the good, actually the present is very dark and the future looks even more grim.