Connecting the dots (with wires)

Yesterday I hacked up a "workbench" gui for JSyn. I just started experimenting with auto-generating the gui based on the UnitGenerator interfaces, it's designed with this in mind so it is fairly simple. 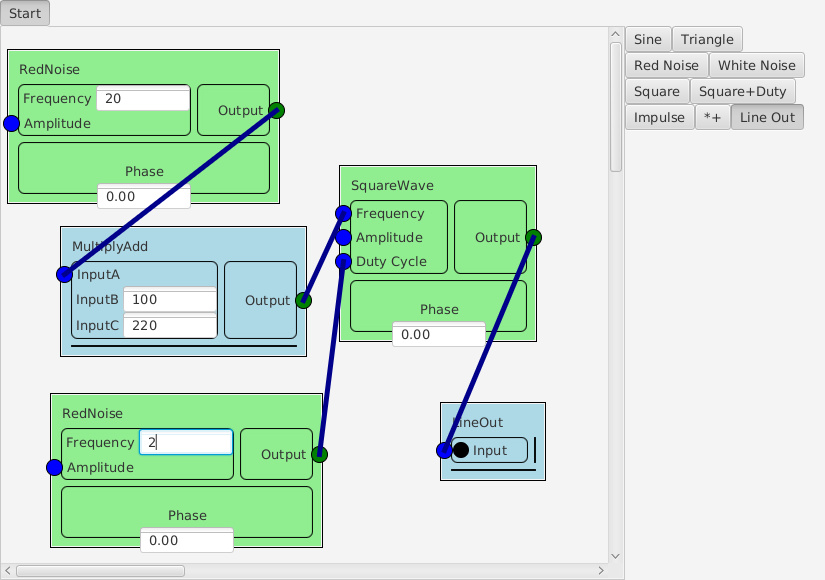 Blocks are added by clicking on the workspace, wires are connected by dragging a line between the discs, blocks can be arbitrarily dragged around, wires or blocks are deleted with delete or backspace keys; typical basic graphical user interface stuff.

One of the more difficult problems was how to wire up the ports ...

The difficulty arises because one uses container classes to form grouped gui components and do the layout, and then you want to be able to bind a linkage between an inner component of the group and components working in a different local coordinate system.

A diagram of the layout hierarchy as it currently exists helps to explain (this is just a prototype so the layout is a bit shit).

So I created a new set of properties socketX, socketY, which reside on each EndPoint which maintain the location of the centre of the Ellipse relative to the lower Pane. The calculation is straightforward and based on transforming to and from scene-relative coordinates. It gets updated whenever the EndPoint is moved (relative to the Generator, i.e. after layout), or when the Generator is moved (i.e. relative to the Pane). The Wire can then just bind to these locations using javafx properties. I've got each generator maintaining the endpoint updates relative to it's parent but i'll probably have to come up with something better.

There's still a problem to solve though; the user interface allows you to plug a wire in to one socket and then drag it to another socket (i.e. click and drag). Unfortunately javafx currently has no way of picking a widget - i.e. looking it up by location or by the mechanism the event system uses. At first I tried using drag and drop mechanisms but it interfered with other gui operations and I couldn't find a way to show the wire following the mouse pointer.

So unfortunately I have to maintain a separate list of all the EndPoints in a model which I then scan for a match during the drag gesture. But given that this allows me to use layouts and stylesheets and so on, this is acceptable.

I created a new square wave oscillator type for JSyn as i was surprised the one it comes with doesn't have a duty cycle (pulse with) parameter. It was one of the more useful features of the square wave oscillator on the SID chip and features heavily in C=64 music. I think it could be created using a sawtooth generator and a gate but this is easier to use and was simple to make.

The circuit above generates a rather grating undulating / phasing sound effect like a 'robot thinking', or with a lower frequency a (metallic) misfiring engine.

I guess i'll add more of the unitgenerators from JSyn and do some experimentation with the code I have. If it's interesting enough i will probably dig deeper into making it a real application; it will need a better system model and probably a way to create a control panel separate from the inner workings of a circuit, as well as oscilloscope and spectrum analyser blocks (JSyn has most of this but it's all Swing).