Been getting pretty bored of being stuck in the house. Enough so that I coded up a basic space invaders game for something to do. At this point almost everything is there apart from the mother ship going past and some other game state things or animations. I've tried to keep the ship movement and wave structure correct (something clones usually try to 'improve') based on the C=64 version.

I'm using javafx for the graphics (i.e. most sprites are just a Rectangle - the actual shape isn't terribly important for the mechanics, and saves copyright issues) but the barriers are WritableImage's and i do the hit detection and bomb erosion on separate image arrays that back them. Because of the way the hit detection works it would probably be easier just to do everything on a bitmap manually but I didn't feel like starting from scratch after starting with a scenegraph version. 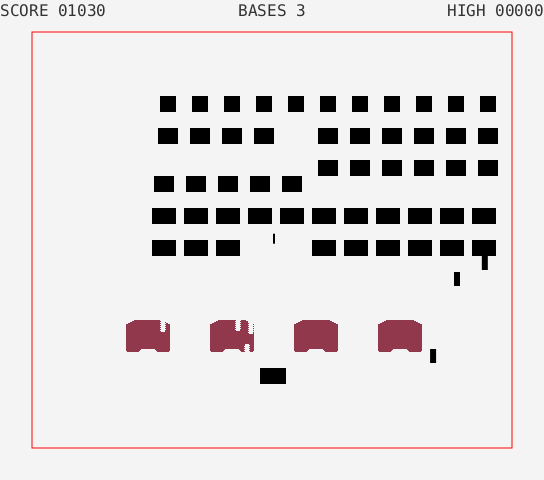 Yesterday I added some sound effects. The invader explosion sound is a flat beep but the rest are more or less correct including the 4-note 'tune' which speeds up as the invader movement does. It doesn't sound right when there's only one left but otherwise it's close.

This lead me to play a bit with the java sound api ... which is somewhat better than I thought it was; e.g. it provides automatic mixing and so on. It also meant I had to do some sound synthesis for the tune and effects. So far i'm generating sample Clip objects from some synthesis code I wrote myself but today I looked into it deeper and found some existing synthesiser libraries that should let me generate some better sounds. But i'll need to play with them a fair bit before getting anywhere. Actually unless I find something i'll probably have to write some tools for it anyway which starts to make it a fairly significant effort.

Last time i played with synthesisers was with the SID around 1990 and I never got very far with that, so i'm starting from a point of somewhat ignorance here.