that sucked a bit

I guess i should've known when i woke up feeling underslept with a headache. It was a dreadfully cold and stormy day so I ... well hacked again.

I had intended to just get a triangle out of an epiphany core, but it just didn't end up happening. I had to muck around getting the rev1 to a 'working' state which took surprisingly long. There are a lot of weird shitty changes to ubuntu (i mean, runlevels, why the fuck would anyone want those???) that took me a while to wade through. I did run the C code I have which outputs to the framebuffer, which worked but is a bit slow. I did seem to have weird issues with USB but a reboot more or less fixed that, with it running through a powered hub. nfs was super-slow till i set it to nfs3 mode. Apparently that's a thing that happens. I also ran one of the ezesdk tests and that worked ... i wasn't sure if that would.

And god, what the fuck have they done to the gtk+ version of emacs? It's like a really ugly version of notepad. I wish I had have found the emacs-lucid packages an hour earlier, would've saved my throat a good deal of violence. But I guess at some point the lucid version wont work anymore, I might have to find another editor (yeah it's that bad).

And what's with all the config/startup shit in debian and ubuntu? Run one tool and it gives a completely obtuse but apparently deep and meaningful message about using another tool, the other tool doesn't know what the fuck's going on and in the end you just edit a file by hand? Why is there even more than one? apt-get/dpkg/whatever else is bad enough. What sort of genious thought that "update-rc.d" was a nice name for a command anyone might ever want to run, ever? Trying to find solutions using a search engine is becoming pointless: it's the blind leading the blind and everything is years out of date. Try finding out how to disable screen blanking on the console for example?

This worked for me:

Net"work"Manager was still spewing pointless shit to the logs whilst trying to "dynamically manage" a fixed ethernet cable ... so fuck that right off. Although i wish more shit actually logged happenings: it seems almost nothing logs when anything goes wrong. I don't see how dedicating a whole virtual terminal to the almost completely information-free "boot.log" is of use to anyone. The packaging system seems to have turned into a sort of enterprise configuration management tool: and you know what, they suck. They're slow and cumbersome and buggy as all shit, and we know because it's linux some doe-eyed fool will come along in a year or two with a new and even more broken 'fix' for all the brokenness.

I can't believe after 20 years of this shit ... it's now way more broken than how it started. At least back then the problems were restricted to hardware support. Now that's fantastic the software has all been fucked up by people poking their noses into places they have no fucking business being.

And i'm still underslept with a headache, with added fun of cold and hungry.

After the last post I kind of remembered one reason to split the work across cores: calculating the reciprocal of 1/w is somewhat expensive unless it can be batched up.

So I was up way too late last night just trying different snippets of code to address that. I think I will go the branchless loop thing that performs the z-buffer test and in-triangle tests separately and then outputs a compact set of coordinates. The compiler was doing some funky stuff but I got some hand-rolled code down to like 10 cycles per pixel (and that could include the 1/w interpolation too); the only real problem with that being the memory required for the output :-/

A separate loop can then just calculate 1/(1/w) to a table (at something like 16 cycles per pixel), and the final loop can then interpolate all the varying values without having to many any decisions about which are live pixels. Without this kind of split there isn't enough registers to keep everything in registers within the inner loops.

Because of the memory it may have to do all this in several batches - slivers of 64 pixels each or somesuch.

But I kinda gave up after today and just worked on a "simple as possible" Java "gpu" to try and have something positive to hang onto after a miserable day (and i started before I got nfs fixed). I needed something which is the distilled/captured knowledge of what I know "so far' as a training simulator. There's still some stuff I need to work out wrt the 3d maths and it's just easier playing with some simple code to do it.

This for example is the code which generates the typical hello world example from OpenGL:

This is functionally equivalent to the low-level part of a gpu driver/hardware after the vertex shader (more or less).

Here the lambda expression is the fragment shader. The main problem with using Java as a fragment shader language is how ugly vector/matrix/complex maths ends up being when you need to use flat arrays for efficiency. 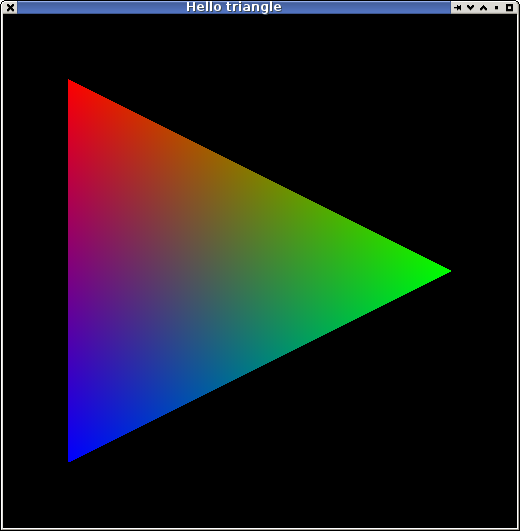 Right now this isn't really much more than a training tool and intellectual curiosity, but it's food for thought that computer systems (cpu+gpu+other) and compiler technology is explicitly working toward a point where code such as the above would be the way you "program" graphics drivers. And it would run just as fast as any other driver software. There will probably still be a need for some fixed-function units but these could also be encapsulated as co-processors. The reason this would be possible now when it wasn't previously is due to the technology that makes HSA possible.

I had a lot of trouble with the matrices and some with the triangle direction - as is usually the case with 3d maths. After playing with some opengl3 tutorials I got it enough worked out to get somewhere. I also played with framebuffer, javafx output, and parallel streams for the tile rendering. Oh and using fixed-point for the triangle edge calculations, which fix some rare edge cases with the edges and might be easier to optimise. And trying to optimise the reciprocal calculation and changing back to the fglrx driver as side-missions (so i could run the gl3 examples - for whatever reason mesa wasn't doing the job, except i forgot which kernel is the one I need to use and the one that mostly works causes some nasty bugs in X). Well you know, a ton of stuff - i lost track of time and suddenly it was 5am. 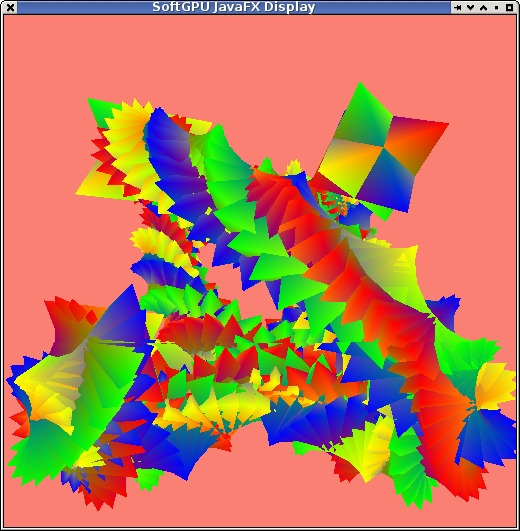 I should really add some lighting but it's quite mesmerising in full-frame-rate motion all the same. Ok result for a week of late nights piss-farting about.

Still no epiphany code; next perhaps?