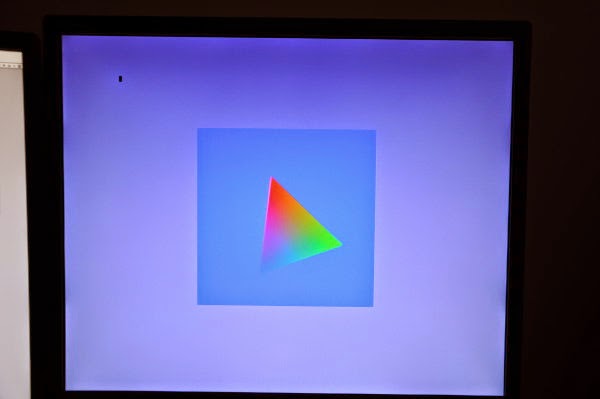 I was nearly going to leave it for the weekend but after Andreas twattered about the last post I figured i'd fill in the last little bit of work to get it running on-screen. It was a bit less work than I thought.

The times are for rotating the triangle around the centre of the screen for 360 degrees, one degree per frame. The active playfield is 512x512 pixels. Z buffer testing is on.

Actually the first triangle was a bit too boring, so it's a few hundred triangles later.

Update: I was just about to call it a night and I spotted a bit of testing code left in: it was always processing 1280 pixels for each triangle rather than the bounding-box. So the times are somewhat out and it's more like arm(-O2)=15.5s, epu 1x=11.5s 4x=3.9s 8x=3.1s 16x=2.4s. I also did some double-buffering and so on but before I spotted this bug but the timing is so shot it turned out to be pointless.

I did confirm that loading the primitive data is a major bottleneck however. But as a baseline the performance is a lot more interesting than it was a few hours ago.