Yesterday afternoon I started to clean up the current rasterisation code in order to dump to another point release of ezesdk. After hitting some hardware issues I found a good-enough workaround (for now) and this morning came up with a slightly more taxing/useful example for some more realistic profiling. 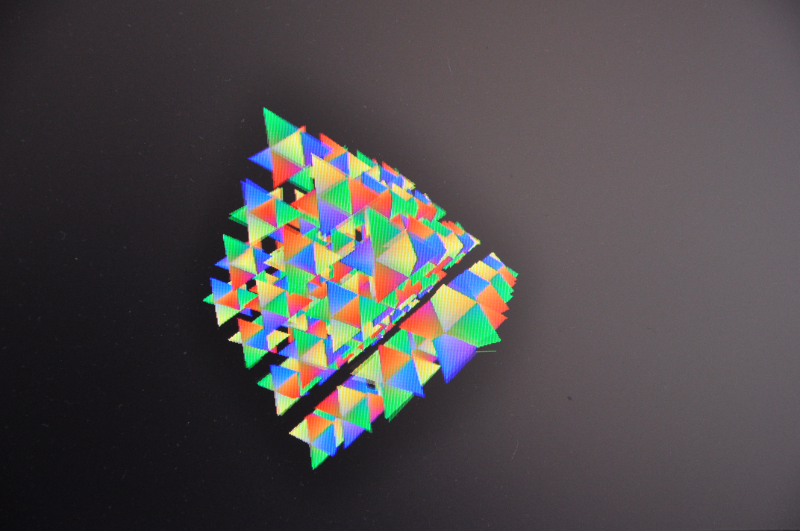 (imagine each is rotating on its centroid independently and all 64 are rotating around together, playfield is 512x512x32-bit)

Here's it's running on a single ARM core at about 30fps (but don't read too much into this since it isn't arm optimised). The main visible rendering artefact is a screen tear. The epiphany can only manage 43fps on this one - so as i'm adding more geometry to the scene it's performance over the arm is dropping (it's about 3x with a single star).

The loading of the primitives is becoming a bottleneck I always knew it was: I know this because if i zoom in closer the epiphany drops to 33fps but the arm chugs right down to about 15. So at least that is something I guess. OTOH I'm only uising one arm core. I can have two running with little impact on each other. Actually I had 3 outputs running at once with little impact on each other (one epiphany and two arms) which was starting to get a little bit impressive to me - combining them all together with a bit of NEON would provide a meaningful boost if they had nothing better to do.

But the problem is that currently each core runs the same code. Each row is rendered completely which involves scanning all the primitives in that band and rendering them. The sequence is essentially:

The primitives include the 3 float values for each of the 3 edge functions, the 1/w interpolator, the z/w interpolator, and the 3 colour channels: and all this data is being loaded each time through each row through each core - i.e. at least N cores per primitive (i'm using 12 to work around some stability issues and its enough to saturate the bus handily anyway) and another multiplying factor for the number of bands their bounding box crosses. With a bounding box and control word this is 136 bytes per primitive and it adds up very fast - to multiple megabytes.

I knew this was a bottleneck but I didn't (and still don't) have a feel yet for how much work a real fragment shader is going to be. But i'm pretty sure you'll be doing interesting stuff and still not hiding this.

Despite everything being on the core there is still plenty of space left, although 512 pixels is a little on the narrow side.

While waking up this morning I had a few ideas that might be able to address this and hope to implement in the coming days and weeks depending on motivation (i'll have some time due to another fortunate break in work). This is still just the first shot and I haven't tested any of them with real code; so as I discover problems I may need to alter the plans - although i do seem to be approaching the original ideas I had. This whole thing is a journey for me as the last time I did any "serious" 3D was using assembly language on an Amiga and it was pretty shit really. I don't have any expectations or baggage from the last 20 years of gpu progress and have no end-goal in mind (so if you're reading this and shaking your head with all the mistakes i'm making; well yes, i just don't know what i'm doing).

So these are a grab bag of ideas just off the top of my head right now and not all of them are compatible with each other.

So putting most of that together this the current image forming in my head:

CTRL
Main controller/primitive reader. This isn't actually much work and it leaves room/time for other functional blocks such as caches. It reads the primitives for each band and then copies them to the rasterisers. The bands will be indexed (or populated) in rows of 12. It could also be in charge of writing rendered pixels from the memory of the fragment shader cores to the framebuffer as an easy way to serialise (optimise) the writes.
REZ0-2
Rasteriser - edges and zwbuffer. These rasterise and perform zbuffering on 12 rows at once (4 rows each). It can send the (primid, x,1/w) tuple to the fragment processors using a single 8-byte, non-blocking, non-arbitrated(!) write. This is just splitting the first inner loop into a separate processor.
FRXY
Fragment processors. Whilst the rasteriser is populating the next row of input the fragment processor is rendering the deferred pixels. This doesn't need a floating point framebuffer since each pixel is only rendered once. Also means it doesn't need to clear it (ok; alpha blending would affect both of these but it affects the whole pipeline). The reciprocal pass will probably go here and the fact that it only needs to run once per visible pixel is another bonus from deferred rendering (although some reverse painters algorithm would also help the number of times a pixel makes it to the fragment processor in the mk i design).

The controller and fragment processors can be further pipelined internally to employ scatter-gather DMA to reduce latency effects.

This all looks pretty complicated but it should be a fairly modest amount of code - it has to be otherwise it wont fit! Actually by using deferred rendering and splitting the stuff up I will have big chunks of memory to spare; I could probably up the maximum rasterisation width to 1024 pixels although now i think about it that's too big for the memory speed. Something in the middle is more likely to be useful.

Because there are now different parts doing different things the differences in runtime of each component will start to dictate the total system performance (and hopefully not the read memory bandwidth). I don't know yet what that will be and it will depend on the rendering task and fragment shaders. If for example the fragment shaders are complicated and dominating execution time then scaling/clamping of the output, and/or reciprocal of the input could be moved elsewhere memory permitting.