First, here is the raw output from one of the haar cascades included in OpenCV (frontalface-alt) using the Viola & Jones object detection algorithm. This is a 20x20 face detector which requires 2135 feature tests via 4630 individual rectangles and approximately 200KB of constant data storage at runtime assuming optimal data packing. 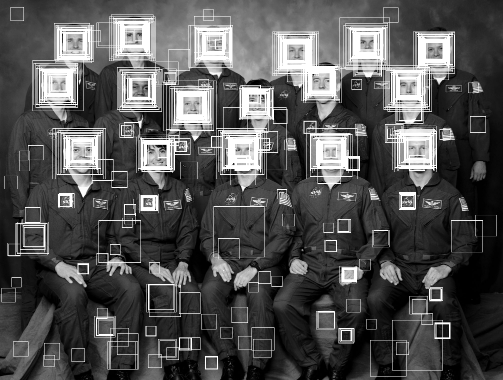 It is being executed over a good number of steps over range of scales and tested at every pixel location of the given scale.

To be usable as a robust face detector further post-processing on the raw hit rectangles must be performed and then further work is needed to weed out false positives such as the NASA logo or hands which would still pass this process. Together with a wise choice of search scale.

The following is the raw output from a short training run of the fodolc algorithm over the same scale range. This is a 20x20 face detector which requires exactly 400 tests of a 4 bit local binary pattern (LBP) encoded image and 800 bytes of data storage at runtime. This is using a loose threshold to give comparable results to the haar cascade and to see what sort of features give false positives. 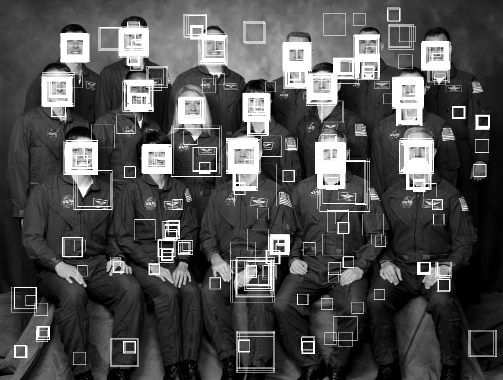 Unlike the haar cascade the output is simply a distance. This can simplify the post-processing to a threshold and basic non-minimal suppression trough detection.

As an example the following the raw output from the same fodolc detector but with a tighter threshold. 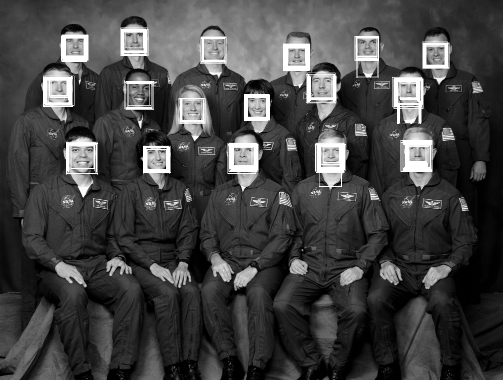 There are still some false positives but obviously it is something of an improvement - trivial trough detection would clean it up to a point exceeding the result of the haar cascade.

In Java on a beefy workstation the execution time is roughly the same between the two algorithms but the fodolc algorithm can be implemented in efficient SIMD or OpenCL/GPU with very little effort for significant (order of magnitude) gains.

Fast Face Detection in One Line of Code has a link to an unpublished paper with brief overview of the algorithm and local binary pattern used.

Please comment on this post if you think this is interesting. Or even if you're just as dumbfounded as I am that something so simple could possibly work.

The face detector was trained using images from the FERET database of facial images collected under the FERET program, sponsored by the DOD Counterdrug Technology Development Program Office (USA).