javafx on parallella via remote X, with added opencl

After the signoff on the last post I thought maybe I had spoken too soon about being able to write front-end code for the parallella in Java. I couldn't get JavaFX doesn't to work via remote X on ARM but writes directly to the framebuffer. While that's a nice think to have it doesn't help me. Always one step forward two steps back eh (I mean I could always just use swing but where's the fun in that).

The gl screensavers and other X11 stuff worked ok. I couldn't find any useful mention of it on the internets until I had a look in jira (openjdk bug system). Came across Monocle which I thought was worth a look. It didn't look all that promising until I saw it was already built-in to the ARM builds.

And ... it worked. Well I guess that's something. I had to add the following to the command line to get javafx working over remote X from an arm box:

I 'fixed' some coprthr peculiarities in the opencl code and got it running (but only on the arm cpu so far): 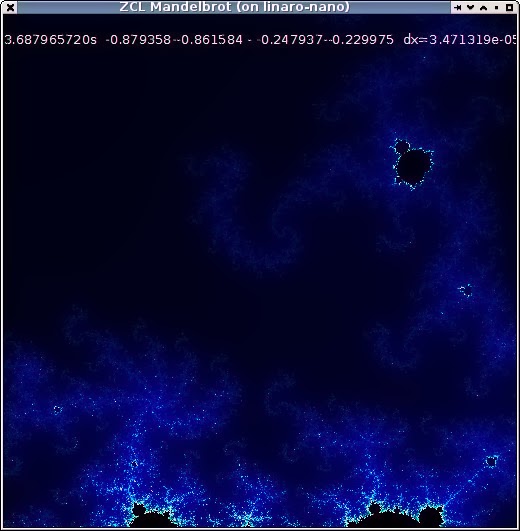 (Not sure what blogger is doing, it doesn't look that bad even with my shitty palette).

At first the UI was very unresponsive then I discovered that clEnqueueNDRangeKernel or clEnqueueReadBuffer runs synchronously - which is obviously not something to be doing from an animation handler. I chucked that through an Executor and whilst it wont win any land-speed records it is now basically usable.