After i blew my AVR/amp a few months ago i've just been using my tv to play music. It's got a screen-off mode but yeah it's not ideal - particularly with the standby power saving thingo that turns it off after a few hours because it's not drawing enough power to indicate it's on.

That amp was about $2K so this time I thought i'd go all cheap and buy what I presume is a d-class amp just to see how it works. I was going to buy a PCB module to play with but I know i'll never have the time to case it properly. I find amplifier technology pretty interesting from a technical perspective and digital amps in particular (the way they work and their efficiency).

I got one of these. FWIW I don't think i'll use "audirect" again to order anything, it just seems to get lost in deal-extreme's ordering system which is still just in china anyway. Actually I was a bit drunk when I ordered it so I got 2 (well I have a 4 speakers + a centre) and the second is the model with the usb input mp3 player which hasn't arrived yet. Yeah I don't know what I was thinking with that, but maybe it'll come in handy or at least doesn't affect the amp part if I plug it into something else. 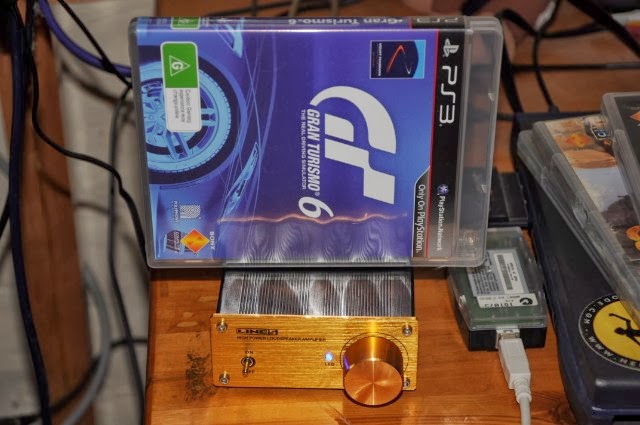 Anyway ... yeah it's tiny - it's not as deep as a DVD case is wide either. It's about the same size as my mele. It came with a small laptop power brick that's about the same size as the one for my thinkpad. It's marked 19v @ 3.42A so that's a 65W PSU which is clearly not enough for "100W" no matter what ohmmage the speakers are! Probably the spec of the amp chip I guess. Still amp power has always been fraudulently advertised so there's no surprise here.

My VAF speakers although a bit long in the tooth are pretty sensitive so it puts out enough volume for a suburban house and I managed to burn one out with my old amp so i don't really want too much anyway. I've got it plugged into the mele and am using it as an internet radio player for the moment. I tried it plugged it into the tv monitor output but for some stupid reason the tv sends the signal after it has been through the volume control so it wasn't any good as a line-out (maybe i had the wrong output, it's hard to get to). I didn't try the headphone output.

I haven't run it very loud for very long but I had it running for a few hours yesterday at about as loud as I might want it while working. After that the box itself was stone cold although the PSU was only a little warm (much cooler than my thinkpad) so I guess it wasn't using many watts.

I'm sure the sound isn't going to win any audiophiles over but i'm not sure their opinion is worth much either. It's more bassy than my old amp which isn't a bad thing although it seems a bit harsh in the mid frequencies when I turn it up, but loud things are harsh so it's hard to tell what's to blame. Could also just be the signal, mp3 artifacts becoming audible, tired speakers, or just the gyprock box of a room it's in.

Not sure i'd recommend it to anyone else but for now it saves me having to get something better and i had a reasonable idea what i was getting.

I just got a mail about my contract restarting soon. Well to be honest I was getting a bit bored with life as a 'man of leisure' but that doesn't mean I wanted it to end either. But I suppose that crust wont earn itself. Good reason to get away from this thing for a bit and get out into the fantastic autumn weather we've been having anyway. Off to buy a new bike tyre and then find some cold beer.

PS I just read the back of the box. One of the better* engrish translations I've read in a while.

Spacing as in the original but formatted for screen.

Update: Just has the other one delivered. At first I couldn't seem to get any sound out of it ... but it turns out that it just isn't very loud - nothing comes out until you're about 50% position. It also uses small press connectors rather than banana plugs - I really should've looked at the pictures when I ordered.

It uses a different PSU too - 4A @ 12V (48W). Other differences are that the volume is also a power knob - although it's got a pretty nasty speaker-pop when you turn it off. The pots are a bit more greased up so they feel a bit more solid to touch which whilst cosmetic does make a difference. Has bass and treble (why?). The input selector toggle on the back seems to be mounted backwards but that is neither here nor there. The USB port is in an inconvenient place relative to the buttons. Might have to get one of those super-short USB memory sticks.

Verdict: The one with the mp3 player isn't worth it as I kinda suspected once I sobered up. Not really loud enough, mp3 player is a tricky because of the button locations and the speaker pop-off is not good.

I guess I lucked out a bit on that one. Still better than the shitty pc speakers or music-angels i've been using so I it's not a total waste.

Update 2: Ok I tried the remote. You can get a (tiny) little bit more volume out of it. And it's got an 'EQ' button which makes the bass/treble knobs redundant (i.e. where the usb port should have been). And a standby mode which stops blowing your speakers with the pop-off thing. I was gonna move my rears into the kitchen/dining area (approx rectilinear 7.5mx6mx3m room with an internal passage-way to the dunny) so it should more than suffice for my purposes and being in the same room means i don't need so much volume anyway. I suppose it's about as loud as I might listen to music whilst working (enough to drown out everything outside from trucks to chainsaws) but not loud enough to dance to (although perhaps the less said about that the better). Should do well with some wine and good mates.

Still probably wouldn't recommend since there are better ways to get sound into speakers than a usb port (e.g. phone, tablet, music player, pc, tv - maybe i can find a use for a spare beagleboard). But i'm happy enough with the bare-bones approach of other one so far.