Yesterday I had to go somewhere and it was near a PC shop I go to so I dropped in an ordered the bits for a new computer with a A10-7850K APU. I got one of the small antec cases (ISK300-150) - for some reason I thought it had an external PSU so I wasn't considering it. I'm really over 'mini' tower cases these days which don't seem too mini. Ordered a 256GB SSD - not really sure why now i think about it, my laptop only has a 100G drive and unless I have movies or lots of DVD iso's on the disk that is more than enough. 8G DD3-2133 ram, ASRock ITX board. Hopefully the 150W PSU will suffice even if i need to run the APU in a lower-power mode, and hopefully everything fits anyway. Going to see how it goes without an optical drive too.

I guess from being new, using some expensive bits like the case, being in australia, and not being the cheapest place to get the parts ... it still added up pretty fast for only 5 things: to about $850 just for the computer with no screens or input peripherals. *shrug* it is what it is. As I suspected the guy said nobody around here really buys AMD of late. Hopefully the HSA driver isn't too far away either, i'm interested in looking into HSA enabled Java, plain old OpenCL, and probably the most interesting to me; other ways to access HSA more directly (assuming linux will support all that too ...). Well, when I get back into it anyway.

Should hopefully get the bits tomorrow arvo - if i'm not too rooted after the "root canal stage 1" in the morning (pun intended). I'll update this post with the build and os install - going to try slackware on this one. I'm interested to see EFI for the first time and/or if there will be problems because of it; i'm not fan of the old PC-BIOS and it's more than about time it died (asrock's efi gui looks pretty garish from pics mind you). Although if M$ and intel were involved i'm sure they managed to fuck it up some how (beyond the obvious mess with the take-over-your-computer encrypted boot stuff. I'm pretty much convinced this is all for one purpose: to embed DRM into the system. I have a hunch that systemd will also be the enabler for this to happen to GNU/Linux. Making life difficult for non-M$ os's was just a bonus.)

PS This will be my primary day-to-day desktop computer; mostly web browsing + email, but also a bit of hobby hacking, console for parallella, etc.

Dentist was ... a little disturbing. He wasn't at all confident he was even going to be able to save the tooth until the last 10 minutes after poking around for an hour and a half. He was just about to give up. It was for resorbtion - and amounted to a very deep and very fiddly filling that went all the way through the top and out the side below the gum-line. Apart from being pretty boring it wasn't really too bad except for a couple of stabs of pain when he went into the nerves before blasting them with more drugs ... until the injections wore off that is. Ouch - I think mainly just bruising from the injections. Well I hope it was worth it anyway and it doesn't just rot away after all that, even with a microscope I don't know how he could see what was going on. Have to go back in 3 months for the root canal job :-( That's the expensive one too.

Anyway, had a few beers then went and got the computer bits. 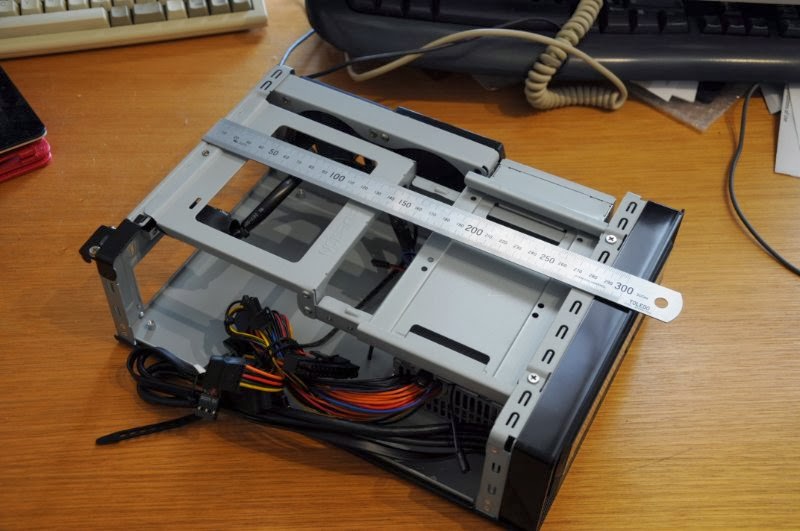 Motherboard is ASRock FM2A88X-ITX - haven't bought one for a while so it seems to have an awful lot of shit on it. Not sure what use hdmi in is ... 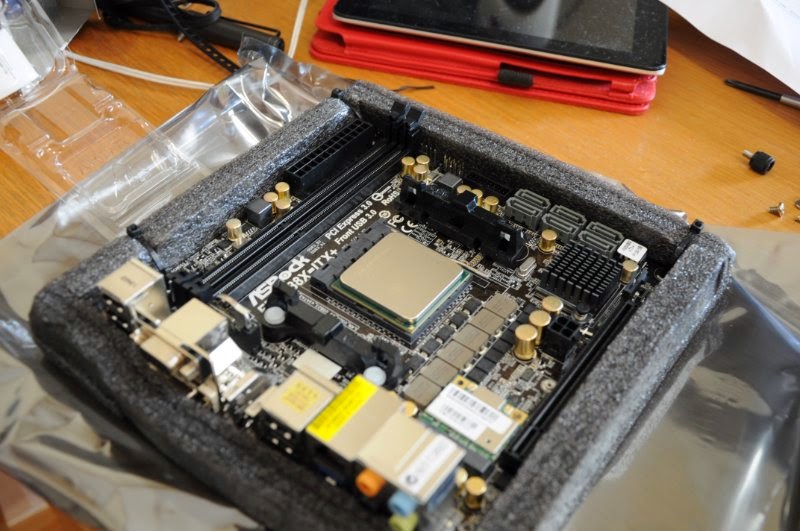 And everything fits fairly well. The main pain was the USB3 header connector which is 2 fat cables and a tall connector. This the first SSD i've installed and it's interesting to see how small/light they are. The guy in the computer shop was origianlly going to sell me some cruicial ram but i went with a lower-profile g.skill one - and just as well, I don't think the other would have fit. 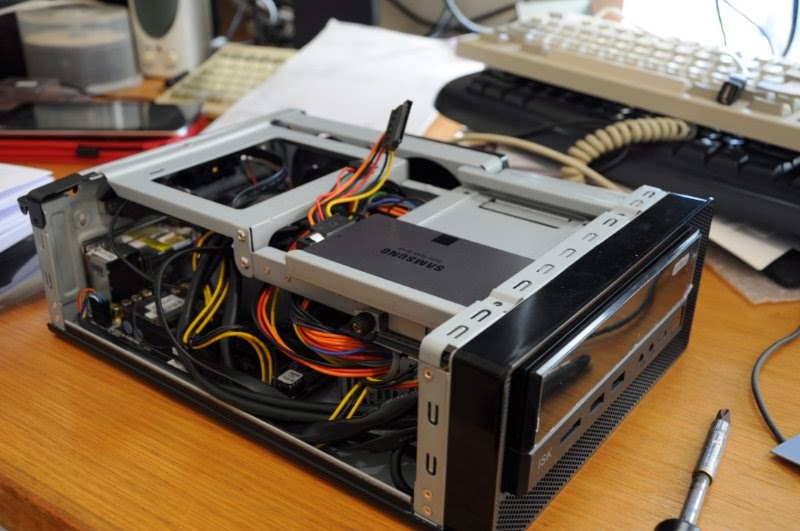 Apart from that everything fits in pretty easy (I might cable-tie some of the cables to the frame though). I updated the firmware using the network bios update thing - which was nice.

Then I booted the slackware64 usb image, created the partitions using gdisk, and started installing directly from my ISP's slackware mirror. A bit slower than doing it locally but I'm in no rush.

I have an old keyboard I intend to use and i was surprised the mobo comes with a PS/2 socket (I was going to use a usb converter). I got it at a mysterious pawn shop one saturday afternoon - mysterious because i've never been able to find it again despite a few attempts looking for it. I must've wildly mis-remembered where it was. It's got a steel base and no m$ windoze keys.

Ok, so looks like I did make a mistake: one must boot in EFI mode from the USB stick for it to install the EFI loader properly. Initially it must've booted using BIOS mode automagically so it didn't prompt for the ELILO install. I just rebooted from the stick and ran setup again. It setup EFI and the bios boot menu fine.

And it took me a little while on X - the APU requires a different driver from the normal ones (search apu catalyst driver). And ... well my test monitor with a HDMI to DVI cable had slipped out a bit and caused some strange behaviour. It worked fine in text mode and for the EFI interface, but turned off when X started (how bizarre). Once I seated it properly it worked as expected. Now hopefully that HSA driver isn't too far away.

Now i've got it that far I don't feel like shuffling screens and cables around to set it up, maybe tomorrow.

Must've had too many coffees yesterday at the pub, I ended up installing the box in a 'temporary' setup and playing around till past midnight. 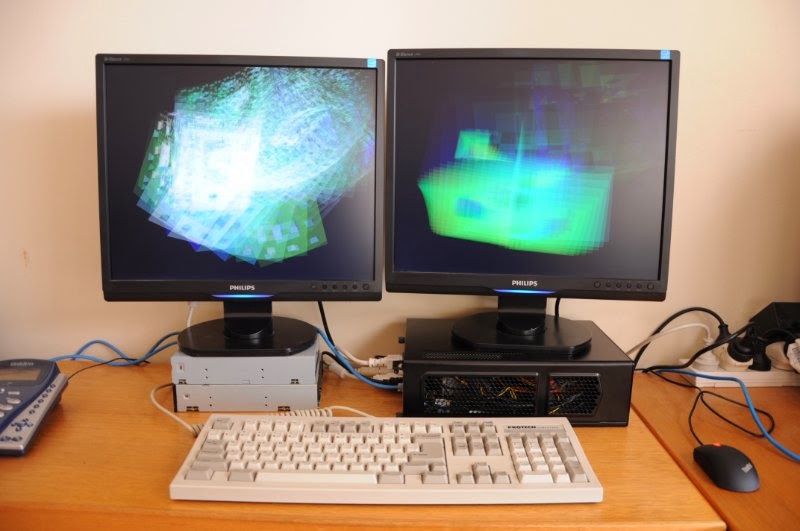 I've got another workstation on the main part of the desk so i'm just using the return which is only 450mm deep - it's a bit cramped but I think this will be ok - not sure on the ergonomics yet. This is where I had my laptop before anyway. There may be other options too but this will do for now.

And yeah, I really did buy some 4:3 monitors although I got them a few years ago (at a slight premium over wide-screen models). For web or writing or pretty much anything other than playing games or watching movies, it's a much better screen size. These 19" models have about as much usable space as a 24" monitor in much less physical area and even a higher resolution at 1600x1200.

I also had a bit of a play with the thermal throttling and so on. With no throttling it gets hot pretty fast - the AMD heatsink is a funny vertical design that doesn't allow cross-flow from the case fan so it doesn't work very well. And it's radial design also seems to cause extra fan noise when it ramps up. The case fan is a bit noisy too. If i turn it up to flat out it will cause the cpu fan to slow down to a reasonable level - so I guess I could operate it that way if I really wanted the speed.

Throttling at 65W via the bios seems a good compromise, I can set the case fan to middle-speed (or low if i'm not doing much) and the machine is only about 10-15% slower (compiling linux).

I knew it was going to be a compromise when going for such a small case so this is ok by me.

Hmm, maybe I spoke too soon - although the X driver is working, GL definitely isn't. For whatever reason GL seemed to point to the wrong version (libGL.so.1.2 points to fglrx but libGL.so.1.2.0 was the old one).

But fixing that ... and nothing GL works at all. Just running glxinfo causes artifacts to show up and anything that outputs graphics == instant (X) crash.

Initially I had no luck - i built a 3.12.12 kernel using the huge config from testing/; the driver build fails due to the use of a GPL symbol. It turns out that was because kernel debugging was turned on in that config. Removing that let me build the driver.

While I was building 3.12.12 I also tried 3.13.4 ... But the driver interface wont build with this one and it looks like it needs a patch for that. Or I missed some kernel config option in the byzantine xconfig (there's something that definitely hasn't improved over the years).

So with 3.12.12 and a running driver GL still didn't seem to work and crashed as soon as I started any GL app. I was about to give up. Then as one last thing I tried turning on the iommu again; and viola ... so far so good. Or maybe not - that lasted till the next reboot. Tried an ATX PSU as well. No difference.

Blah. I have no idea now?

Then I saw a new bios came out between when i updated it yesterday and today so I tried that.

Hmm, seems to be working so far. I reset the bios to defaults (oops, bad idea, it wiped out the efi boot entry), fixed the boot entry, fixed the ram speed (it uses 1600 intead of 2133). Doesn't need the iommu on. And doesn't seem to need thermal throttling to keep it running ok. So maybe it was a bung bios.

I decided to do a little cleanup of the cables to help with airflow and tidy up the main volume. It had been getting a bit warm on one of the support chips (the heatsink on left corner of mobo). The whole drive frame is a bit of a pain for that tiny SSD drive. 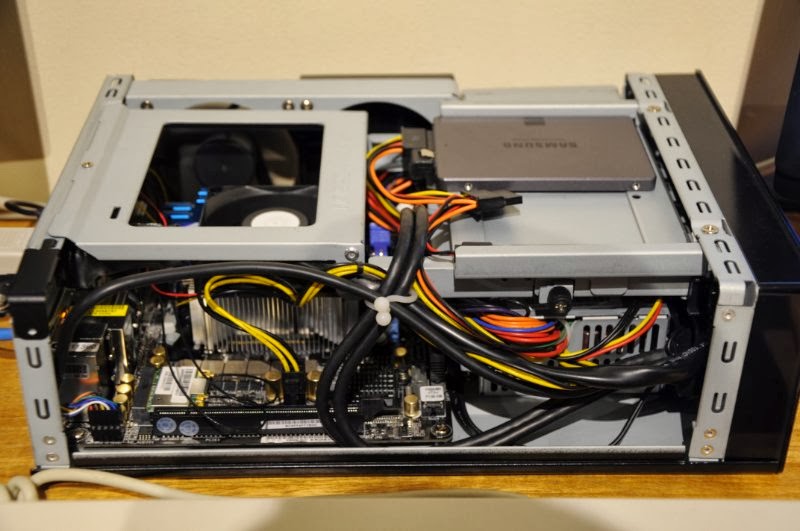 Since the BIOS update it's been running a lot cooler anyway. In general use I might be able to get away with the case fan on it's lowest setting with all the default BIOS settings.

Update: Been running solid for the 3 days since I put it back together. During 'normal use' the slowest fan setting is more than enough and it runs quiet and cool (normal use == browsing 20+tabs, pdf viewers, netbeans, a pile of xterms). And quite novel having a 'suspend to ram' option that works reliably on a desktop machine (like i said: been a long time since i build a pc, and that just didn't work properly). Yay for slackware!