I was poking around at making a simple map viewer in a way that works directly with tiled output mainly as a way to see the animation stuff in motion. But I looked a bit further at using it for some other map related things. 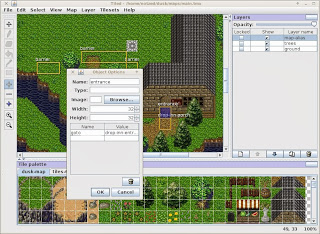 I store everything in a jar file - from a set of pngs for the tilesets, to the multi-layered map, the tile 'script' information, and I just had a quick 15 minute poke to see how to add the location based script information shown here as well. This allows one to define some basic behaviour like impassable barriers, doors/portals, and calls out to scripts directly in the tiled.

per-tile properties allow one to define impassable/un"stand"able objects, or calls to scripts, and the animation sequences - i'm still coming up with a simple enough design for the last point, but it will probably be something like:

Where group is symbolic, step is a sequence number, and the duration is the number of milliseconds per step taken from the tile with a step of 0. To make a tile animatable, one draws using the tile with step 0. This allows the same tiles to be used in different animation sequences so long as step 0 is unique. I'm still debating whether i have an extra layer of indirection and define animation sets which operate together to ensure they are always in sync. However i'm not sure it's worth the complication as I think the lower level animation system can ensure that anyway.

Tagged dusk.
lambdas to the slaughter ... | How on earth did ant become the build tool for java?
Copyright (C) 2019 Michael Zucchi, All Rights Reserved. Powered by gcc & me!