I had a couple of hours after waking up too early so I hacked a couple more things into the prototype map viewer - almost making it a useful-if-a-bit-crude tool.

First it displays any 'interesting' tiles - ones with any associated game behaviour - using red squares. Then as it was so simple even though it isn't terribly useful more than once, it does the same for the original dusk game - using blue squares. Then down the left-hand side it shows all the details of the scripts. 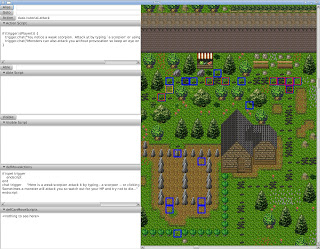 For starters it shows that I didn't get the tutorial complete after-all, although one of those squares just has an empty script.

Not a lot more work is required to turn it into a useful if basic game behaviour editor. Just the ability to save and create scripts and a few little lookup and navigation functions.

A couple of days ago after some work on jjjay I had a fleeting thought about how the game might be transformed to use a database backend. With Berkeley DB JE it would be a cinch, I could reliably persist all the live game objects into a single table with very little work indeed - the subclassing stuff is better than I can recall from last time i looked at it but I suspect I just didn't look too closely. I shouldn't need any DTO's. Actually it would probably turn out to be easier than all the text-mode import/export stuff I had to come up with and it could also be used to replace some of the internal indices. Using a db means that a text editor can no longer be the primary development tool so it would also require additional tooling. Something to ferment in the wort a bit longer ...

I had some other fleeing thought about something about the game, but it just flitted away ...

Oh thats right on the flittery thought. The way JavaScript is being used in the scripts is so simple, I wonder if it isn't easier just using Java instead. The scripts would stay in their format but could inserted into a template before being compiled. Might be an option for rarely-changing/performance critical tasks, but might not be so easy for any dynamic content. Definitely not something i'm going to rush into without a lot of experimentation.