So after a few ui changes I tried jjjay on the tablet ... oh hang on, there's no menu button and no way to bring it up.

That's one ui design idea out the window ...

So basically I am forced to use an actionbar, and seeing how that is the case I decided to get rid of everything else and just use the actionbar for the buttons. Goodbye jog-wheel, it wasn't really doing anything useful on that screen anyway (unless I added a preview window, but that's going to be too slow/take up too much room on a phone). I also moved the scale/scrollbar thing to the bottom of the screen which is much more usable on a phone as otherwise you accidentally hit the action bar or the notification pull-down too easily. 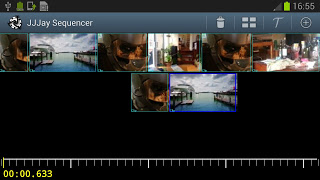 It creates a more uncluttered view so I suppose it was a better idea anyway.

I fixed a few other little things, played with hooking up buttons to focus/action, and experimented with a 'fling' animator, but at this point some bits of the prototype hacked-up code is starting to collapse in upon itself. It's not really worth spending much more time trying to get it to do other things without a good reorganisation and clean up of some fairly sizeable sections.

I need a model for the time scale pan/zoom although I could live without that for the time being. A model for the sequencer is probably more necessary otherwise adding basic operations such as delete get messier and messier. There's still a bunch of basic interface required too; setting project and rendering particulars, and basic clip details such as transition time and effects.