Sometimes I hate it when I have ideas in my head and they just wont go. Last night I was getting bored with TV and kept thinking about a sequence editor - the most complex single interface component I'm after - so I fired up the computer and hacked from 11pm till 3am or so. The the less sleep I get the more "anxious to get shit done" I seem to be, until I fall apart.

So although it's not much to look at yet - and the code behind it is even worse - last night together with a few hours today I came up with the following interface and all the guts to make it work. 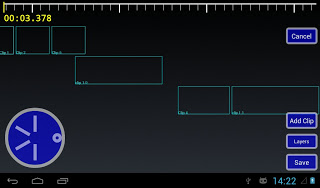 I'm not sure if i need the jog-wheel there as the functionality is provided by the scale too, but it lets one move the timeline forwards/backwards. I also doubt i need to support any-number-of-layers, but I suppose I may as well - once you have more than one, any number isn't much harder.

The scale at the top can be dragged - it acts like a scroll-bar, or two fingers pressed on it can be used to zoom in and out.

The main sequence interface is modal, in that you are either working with 'layers' (or 'tracks'?) or clips. The "Layers" button is a toggle which switches modes, although I think I need a better interface design for that. 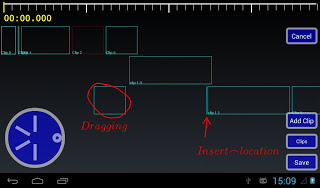 I don't have animations (i'm kind of up in the air on them as most of the time they just piss me off with their added delay) but the clips can be "drag and dropped" around the sequence in fairly obvious ways. So for example dragging a clip creates a layer-locked box which follows your finger, and a | indicator where it can be inserted. Letting go moves the clip to the new location, creating new layers as required.

Layers work similarly, except layers can be re-arranged, and the start position for the layer can be altered. All clips within a layer always run one after another. Doing things like moving the first clip causes the layer origin to be moved so the rest of the content isn't changed and so on, so it kind of 'just works' like you'd expect.

I have a basic single-item selection mechanism too, for deleting or other item-sensitive operations (e.g. where does 'add clip' add?).

So although the code is a complete pigs breakfast it is quite functional and stable, and with a bit of styling and frame graphics it's almost feature complete. Probably the last major functionality missing would be some start/end 'snapping' - but that's more of a nice-to-have.

Yesterday afternoon - when I was supposed to be relaxing - I worked on a prototype of a compositing and video creation engine. Initially I tried to use the ImageZ approach of compositing in floats, row-by-row, but android's java just isn't fast enough to make that practical. So I fell back to just using android's Canvas interface as the compositor. I guess it makes more sense anyway as it gives me a lot of functionality for free. I could get more performance bypassing it, but it's going to be a great deal of work. Obviously, I didn't attempt audio.

Initially I just wanted to see how performance was, but I ended up adding video and text "sources", which can be mixed/matched together. Performance is ... well it's ok, it's just a mobile platform with a purely CPU pipeline. A 10 second 800x600@25fps MP4 medium-quality clip takes about 20 seconds to decode+render+encode on the *ainol elf 2. For the compositor, about half the time is spent in decoding the source material and half spent in compositing, which isn't exactly flash - but it's all bytebuffers and Bitmaps and copying shit around multiple times so it's hardly surprising.

As usual the ideas in my head exploded yesterday and I thought about all sorts things: ways to create an interesting and usable interface, keyframe animation of clips and properties, multiple 'use modes' such as a simple video cutter, potential local client/server operation, using your pc to do the rendering, or using the tablet as an interactive control surface for a pc based application. But whether i'll have the time and motivation to see any of it through is another matter.

If i remember to, I'm going to try to track how much time i've spent on this project, so far it's about 3 days. I initially thought I could do a quick-and-dirty "weekend hack" and see how far I got and just leave it at that, and then thought the better of it. It's a 5-day long weekend for me so that's too much like hard work!