Given the day started raining I spent most of it hacking on Dusk again. Coded up a shop-front. 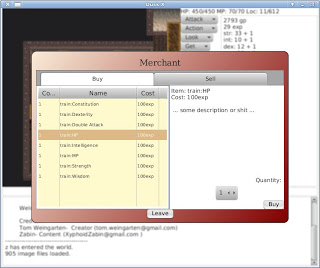 Yeah the styling is naff, but it isn't meant to be better. The main window blurs when it's shown.

I gotta say the layout was a lot messier than I would have thought. VBox and HBox only allow consistent alignment for all items in the stack - which seems pretty pointless to me. I'd have thought a common use-case for a VBox would be a stack of things with different alignments. And I couldn't get GridPane or BorderPane to work very well either, although perhaps I could now with the following knowledge.

Basically to perform arbitrary alignment and expansion of cells within a vbox or hbox, one has to embed a hbox or vbox for each containee, set it to fill, and then set the containee alingment on that. It's just rather clumsy. As for the table view I had to hard-code everything to make it behave at all.

And learning a new toolkit is always a pain - probably took 5 hours to do this one simple window even though i've been working with layout based toolkits since gtk 1. And even then it seems to have some nasty javafx bug in which the table view in the Sell tab doesn't render properly. I really must try this stuff on another box to see if it is just something wrong locally like the shitty Intel IGP or it being 32-bit.