Boy, the gutter thing turned into a much bigger job - a load of wood-rot (part of the reason I was doing it in the first place), so I had to re-enforce/repair the fascia before I could even get to mounting the leaf eater.

Nearly didn't get to the biltong cutter - i'm a bit sick of the sawdust and noise and not having a workbench. But I had a couple of hours free so had a go at a "quick job". 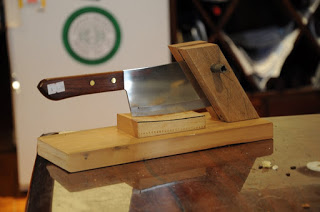 Of course, nothing is ever "quick", particularly if you haven't done anything like this for a while. The main hassle was creating a curved cutting surface as the knife is curved. It's a bit rough but it works quite well. I could probably use a better axle but the one I have works. I could also do with a drill press.

The uprights are at an angle as I already had some wood with angled cuts in it, and I thought it might be stronger having the screws going across the grain a bit. The cutting block it positioned so the blade has the closest tolerance - although I got sick of sanding so it isn't perfect.

So the trick was to find a cheap/fairly robust blade. I tried finding old tools but that was pointless and in the end I was going through an asian grocer's knife section and found a bunch of cleaver type knives, some with holes already at the top/front. I went for the medium sized one at all of $6.90 which already had a ~13mm hole in it. I guess I could always re-grind it to have a straight, chiselled edge, but the curve adds a slicing action.

The only thing i'm wary of is mixing such a dangerous tool with alcohol ... i'm sure it'd make short work of fingers or toes!

Update: It works quite well and I've still got the appendages, but I decided to make a slight improvement. With no clamping support the uprights tended to drift apart slightly which made the blade a bit loose after a while.

I took the shim out and trimmed it to size and then put a bolt through the middle. I just happened to have a brand new bolt exactly the right diameter and length sitting around. It expanded the shim slightly to be a tighter fit with the axel mounting holes and also a better fit with the existing hole in the knife. Having a threaded bolt allows me to tighten up the gap between the uprights so the knife stays straighter during a cut. A few drops of grapeseed oil had it moving smoothly even when fairly tight. The curved blade works well with the slicing action and gives a bit more cutting power than a direct downward action does.

Not bad for 15 minutes after a warm afternoon boozing it up.

With the changes everything feels a good bit tighter and more controlled and subsequently it is a bit easier to use with extra-dry meat or other harder material. It would still be better to have a chisel point but the knife edge is ok enough. Perhaps in hindsight the extra $3 for the next knife size up with the thicker blade might have been a good idea too but for a $7 experiment i'm happy enough and it is nice and compact.

It also makes a great over-dried galangal (the only kind available at the moment) cutter or anything similarly hard one wishes to slice extra-fine.