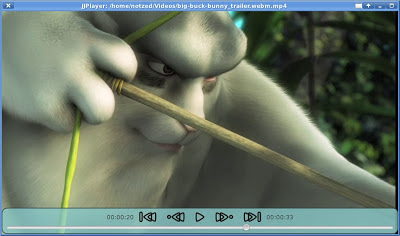 The new buttons and styling.

There were a few annoying things along the way. The keyboard input was a bit of a pain to get working, I had to override Slider.requestFocus() so it wouldn't grab keyboard focus when used via the mouse (despite not being in the focus traversal), and I added a 'glass-pane' over the top of the window to grab all keyboard events. I had to remove all buttosn from the focus traversal group and only put the 'glass-pane' in it. I made the glass-pane mouse-transparent so the buttons still work.

Another strange thing was full-screen mode. Although JavaFX captures ESC to turn it off, the ESC key event still ends up coming through to my keyboard handler. i.e. I have to track the fullscreen state separately and quit only if it's pressed twice.

Next to fix is those a/v sync issues ...

Update Well instead I added a frame capture function. Hit print-screen and it captures the currently displayed frame (raw RGB) and opens a pannable/zoomable image viewer. From here the image can be saved to a file. 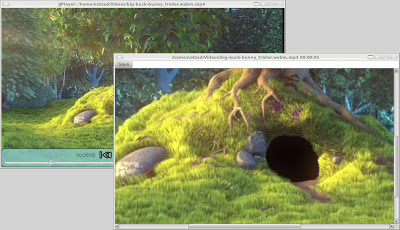 Although I haven't implemented it, one could imagine adding options to automatically annotate it in various ways - timestamp, filename, and so on.

Update 2: I subsequently discovered "accelerators", so i've changed the code to use those instead of the 'glass pane' approach - a ton of pointless anonymous inner Runnables, but it feels less like a hack.

Update 3: I tried it on my laptop which is a bit dated and runs 32-bit fedora with a shitty Intel onboard GPU (i.e. worthless). It runs, but it's pretty inefficient - 2-4x higher load than mplayer on same source. Partly due to Java2D pipeline I guess but it's probably all the excess frame copying and memory usage. I tried to do some profiling on the workstation but didn't have much luck. Just seems to be spending most of it's time in Gtk_MainLoop, although the profiler doesn't seem to know how to sort properly either.