This morning I added sound and started work on some controls for the JavaFX version of JJPlayer. 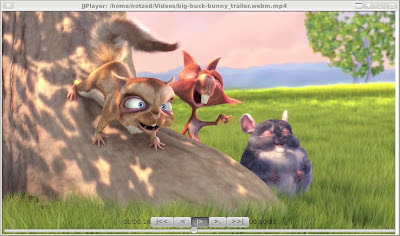 It's mostly pretty buggy but it kind of works ... some of the time.

I got JavaSound working easily enough at least - although i'm just converting to stereo 16-bit for now as I did on Android.

But there are some big problems with the way i'm handling the a/v sync when pause or seeking, so things get messed up some of the time. Too lazy to fix it right now ...

I kept playing a bit with the UI and added a fade in/out of the controls as well as hiding the mouse pointer, and some stylesheet stuff. 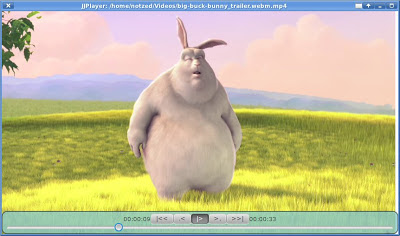 Clearly the styling and the ASCII-icon buttons both leave something to be desired at this point.

I thought i'd have trouble getting the hiding to reverse if the user started moving the mouse whilst it was hiding, but it turned out to be pretty easy. Just change the rate on the fading out animation to reverse it, and it still runs to completion at the other end instead. So it fades in and out smoothly depending on user action, and without any eye-jars.