Although it's pretty bare of features given it's long development, one of the tools I use quite often is Eye of GNOME. It feels like an Amiga tool - i.e. it's a GUI tool which is easily used from either the command line or in a GUI context. One of the more useful features is to give it a list of only a few files which you can flick through - rather than being forced to navigate through a complete directory listing as in other tools.

Well, where it is available - Image viewers seem to have a strange habit of disappearing from distributions because "mature with no bugs" seems to be interpreted by distribution vendors as "unmaintained". Sigh.

This is not a post about that ... but it is about a quick and dirty multiple-image viewer I needed for a project which I easily turned into a similar tool. I called it EOFX in homage to eog, even if Federico was the one who confusingly decided "Recents" was the most useful way to open a Save file requester in gtk+ applications (until that started showing up, I never new Recents even existed). 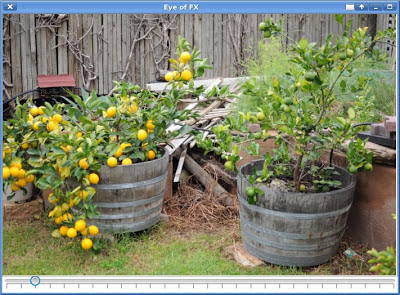 Although it's rather bare, it's functional and could be extended fairly easily. Scroll-wheel zooms, pointer pans, you can sort of navigate with the keyboard (if the slider has focus).

I used a trick to get the scrollbars to work properly - by placing the ImageView inside a Group inside the ScrollPane, zooming resizes the layout and forces the scrollbars as appropriate. Without that setting the zoom factor merely changes the rendering of the ImageView, and it doesn't work properly. And then you must restort to other nasty hacks to get it to size like binding dimensions and so on - which seems to be the method de jour in JavaFX circles, even if it just doesn't work properly (it still causes issues with automatic layouts). Unfortunately Group's also interfere with automatic layout so it might not work if I wanted to fix some of the zooming issues.

But one thing i've noticed about using JavaFX so far is that it just doesn't take much code to do common things. Although it isn't the prettiest or nicest implementation of it, this image viewer allows pan and zoom and flicking through a set of images in only a handful of lines of code. Just getting a basic version of this going in Swing (or any other toolkit i've used) requires a lot of custom code and faffing about.

As a bonus, I wrote the argument passing in a way which allows one to give it arbitrary URLs as well as files, it uses a file requester if no arguments are given (so can be launched by a desktop os), and it remembers the last visited directory if using the file requester (a pet peeve of many a similar application).

The project i'm working on has changed direction again, and part of that is a desktop version of some android stuff - and this gives me an opportunity to explore JavaFX more seriously. I guess I will soon see how it really stacks up.