I had another poke at the slideshow idea, I wanted to play with tiled transitions, how to do them and to see how well they performed. 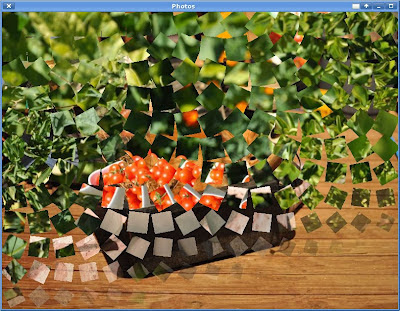 Works pretty well with the GPU driver, but a little chunky as an applet or with the cpu driver - but here's the Applet & Web Start launcher of a canned demo. I just included 4 shots of mine in the jar to simplify loading them for a demo. It looks much better if it can keep up with the frame-rate requirements.

It's only doing random effects so sometimes they're a bit bland (and i'm not sure if the webstart version implements all effects), but some quite nice transitions come up sometimes. The only 'trick' is breaking the image up into multiple image views - i.e. just texture mapping squares of image separately. Each ImageView is just then animated separately after that. I had to create my own Interpolator as the default ease-in one is a bit flaccid for my liking - although creating a spline in your head is a bit hit and miss ...

Update: For various reasons I had a lot of time and the inclination to poke today, so i hacked in a few more things into the code (this stuff isn't in the applet).

First I added a 'start from centre' translation transition for the block animator which leads to some particularly pleasant transitions. Then I played with smaller rectangles - it changes the feel of the animations more than you would think, quite pretty, but it quickly starts to bog down the transition setup code as the tiles get smaller. About 20x20 is a reasonable compromise although I left it at 40x40. At 10x10 it takes a couple of seconds to build the transition tables.

Finally I worked out 'mask' based transitions and hacked them in as a random option. I tried a couple of variations, rendering to a canvas, just animating a shape (text), and changing geometry (a filled arc). That should cover about every possibility one might want. It's mostly just down to getting the blend modes and layout right and making sure the end of the animation covers the whole window.