JavaFX Media, or not, and a Video Cube.

I got a bit stuck at work today (yesterday) so I took the arvo off. It was the warmest day post-winter (25 degrees, but windy) which was a good excuse, but I also had a lazy look at the JavaFX media stuff.

Actually as per the updates on the previous post I also discovered how to enable GL acceleration on AMD hardware, and it gave the appropriate speed-up - given the previous iteration was using Java2D, it shows just how decent Java2D is (Java2D is rather nice).

But as to the media player - nice api - pretty weird results. Despite using ffmpeg, it only supports a limited number of formats and one of the transcoded tv shows I put through it played back oddly. Sound was ok, cpu usage was very low, but it skipped most frames, and not in a particularly regular way either - making it uncomfortable to watch. Who knows, maybe it's a non-standard encoding or just a bug with the current implementation.

So I guess I will port over jjmpeg at some point - it's not like it should be much work. ... although sound looks as painful as ever ...

Ok I had another play with JavaFX this evening. It might not be as technically impressive as 9 Fingers, but this one is actually decoding the 6 videos concurrently (2xPAL MPEG TS, 4xlesser MP4), and runs smooth with only about 1.5 cpu cores busy (I7 6x core blah blah). 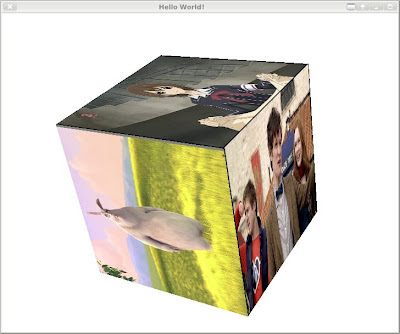 It looks a lot better in motion (actually I locked this orientation to get a screen capture - otherwise it updated too fast and mucked it up) ... seems to run 'full frame rate', with no tearing I can see. I'm not buffering any frames ahead of time or doing anything complex - but it seems to be keeping up with all the video decodes as well. I get the occasional jump if the system is busy - mostly netbeans displaying the debug logs.

Rather than using MediaPlayer I'm using jjmpeg to do the video decode as it supports more formats and plays back every frame properly on GNU/Linux. I just use a simple JJMediaReader loop, it runs libswscale to create PIX_FMT_BGRA at the original video resolution, and I set the pixels into the WritableImage using PixelFormat.getIntArgbPreInstance(). I'm using JavaFX to do the image scaling and all the rest. I do not decode (nor obviously; play) the sound.