Well I really wanted to see if the object detector I came up with actually works in practice, and whether all that NEONifying was worth it. Up until now i've just been looking at heat-maps from running the detector on a single still image.

So I hacked up an android demo (I did start on the beagleboard but decided it was too much work even for a cold wintry day), and after fixing some bugs and summation mathematics errors - must fix the other post, managed to get some nice results. 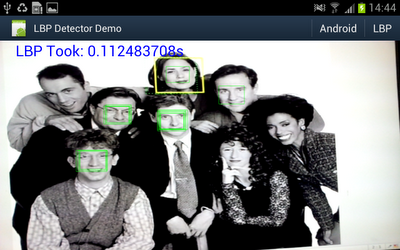 A bit under 10fps. And for comparison I hooked up some code to switch between my code or the android supplied one. 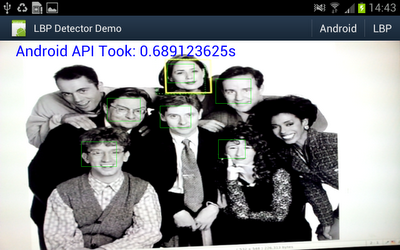 I was just holding the "phone" up to a picture on my workstation monitor.

Some information on what's going on:

A good 6x performance improvement is ok by me using these conservative search parameters. For example if I simply change the scale step to 1.2x, it ends up 10x faster (with still usable results). Or if I increase the minimum search size to 3x17 instead of 2x17, execution time halves. Doing both results in over 25ps. And there's still an unused core sitting idle ...

As listed above - this represents the worst-case performance. Unlike viola & jones whose execution time is dynamic based on the average depth of cascade executed.

But other more dynamic algorithms could be used to trim the execution time further - possibly significantly - such as a coarser search step, or a smaller subset/smaller scale classifier used as a 'cascaded' pruning stage. Or they could be used to improve the results - e.g. more accurate centring.

Update: Out of curiosity I tried an 8x8 detector - this executes much faster, not only because it's doing under 25% of the work at the same scale, but more to the point because it runs at smaller image sizes for the same detected object scale. I created a pretty dumb classifier using scaled versions of the CBCL face set. It isn't quite reliable enough for a detector on it's own, but it does run a lot faster.