So given that the feature tests with the classifier i've been working with are independent ... it offers a fairly interesting possibility: that of using sub-regions of a single trained classifier to detect corresponding sub-regions of the image with a higher resolving power.

This isn't a very good picture, but it demonstrates what's going on (it's from the same source image as the previous posts). 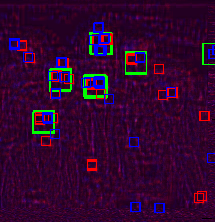 Here I am using a single trained classifier for faces, but from that classifier detecting 4 classes of subregions - the full face, each eye separately (9x9 corners), and the eye pair (17x9 top region). In the picture I am showing green for the face, red for left eye, and blue for right eye (as the RGB intensities as well as the detection boxes). This is the raw detections at a single scale with no grouping, and I haven't determined if the threshold can be tweaked to improve the false positives. The RGB image shows the RGB components overlayed with respect to the top-left of the detection box, not the centre of each feature (so a white dot means everything aligns). I'm drawing a 21x21 green box just to make it easier to see.

It's not perfect, but it is detecting localised eye positions within the faces.

So even using the same trained classifier it allows a finer resolution of the eye locations, and a further test to remove false positives. The fact there are a lot of false positives for the eyes is not very important as only those in the green boxes (and in the correct quadrant) are of interest. The main downside is such a small feature test means low accuracy for larger images (as they are downscaled more to start with).

The kicker: in opencl this executes at the same speed as the single classifier as most of the work is shared. A fixed set of additional separately trained classifiers can also be added very cheaply as the classifier runs in LDS to reduce the bandwidth needs.

Update: So i've been trying to utilise this, and although it kind of works it doesn't kind of work well enough to be that useful, at least with the classifier I have.

However, on the base LBP detector, with a bit of tweaking to the training data I have been able to get fairly decent performance. For some sequences it is clearly outperforming the haar cascades from OpenCV, whilst retaining the braind-dead fast training algorithm. The fact that it gives a score allows for more post-processing options as well.

Actually anything I try to do to 'improve it', e.g. by weighting some regions, just breaks it's resolving power. I seem to have much more luck by adjusting the training images. For example I revisited the eye detector based on the data used for the haar data. I noticed there was a bit too much variation in scale and variety of the eye images being used. So I tried instead creating a subset of images which were closer to a hand-picked candidate - this made a much better eye detector, even for eye shapes which weren't included in the training set. Although left eyes (right from the front) are always a problem - they have a less consistent and distinctive 'eye shape' than right eyes which gives classifiers trouble.

I find this machine learning stuff pretty frustrating as it just seems to involve a bit too much magic, and my mathematics skills just aren't up to the task of delving further.