So for some strange reason I have an abundance of tomatoes at the moment - being June, this is way way out of season. Considering I had tomatoes from October to February as well, it's been a strange year.

The wet is making them split a bit, and together with a lot of bug problems it means they're best picked green before they get eaten or go rotten

I started getting more than I could consume so I made some sauce (not a fan of the green tomato pickles). It's pretty much a plain tomato sauce recipe, but with green or pink tomatoes instead of red. A bit more sugar to compensate (and to compensate for not measuring the salt properly). And since I made it - a shit-load of chillies. The habanero plants are suffering in the cold too and getting a bit of mould problems, so I just grabbed all the chillies I had left on the plants as well. Chucked in a bit of sweet potato I grabbed out of the ground as well since I had it - probably should've used more as i have more of that than I use too. 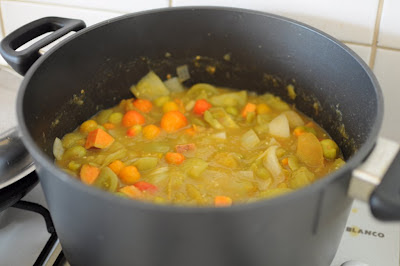 So, plenty of chillies. I didn't count but it's at least 2-3 cups worth. Plus a handful of all the other green chillies i found in the garden (cayesan and serrano).

It looks much like some fermented green chilli sauce I made (tabasco style), but this has much more of a bite to it. Otherwise it tastes much like home-made tomato sauce, the red kind. While licking the spoon I had enough chilli to give me the hiccups - which means it's pretty hot. 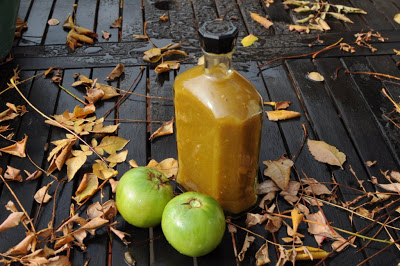 Nearly 3 litres of that should keep me warm over winter and beyond ... I don't even use tomato sauce that often, but this stuff is great with a burnt snag or a boiled sav in a bit of bread. Used sparingly.

Was busy cooking most of the day yesterday, I also made a banana cake (a couple of bananas getting past it that needed using) and another 2l of lime cordial. I used the same recipe as last time but put twice as much lime juice in it- came out much better. More limey and less 'cane sugar'.

PS I used half a bottle of ezy-sauce in the ~2.5kg of the green fruit, so acid shouldn't be a problem.