Well, after a hair-pulling week (well I need a haircut, and i'm having a break for a few weeks next week) I'm finally getting somewhere with the HD7970. Not just having it crash the machine on me every test run makes for a much better day.

Some of that time was spent trying to track down crashes inside the clsurf code ... but they were all because I didn't notice that it needed images rounded up to 16 pixels wide ... sigh. Oops. Most of the rest was some barrier issues with my new code - it's been a while and I forgot some of the finer points. Getting it working on a CPU driver was a good help there because if you get the barriers wrong you just get nonsense results.

There was also a lot of time wasted rebooting - not only because of the code that crashes the driver, but because it still decides to start returning CL_OUT_OF_HOST_MEMORY all of a sudden. And I didn't realise till last night I can just log out of/back into X to fix this until it happens again. And time wasted verifying my drivers were ok too - which probably was wasted (and now i have a broken dependency map and catalyst libraries splatted over lib64 to boot). And finally I think I found a bug in the AMD driver as well, it's getting a divide-by-zero signal (which causes the jvm to abort!) when using a local worksize < 64 - this isn't something I normally do, but the occasional algorithm benefits from it. It's not too difficult to work around at least.

I finally have some RANSAC code working on the new card. And it's a screamer.

I'm getting around 2-3x total performance boost compared to the HD6950 for one run of the RANSAC code. Although I can up the number of RANSAC random probes by 4x and still run about 2x faster (this was not the case with the 6950, 2x probes meant 2x time taken) (so it's about 8x faster then). I thought i'd make a plot of the scalability to see how it does. 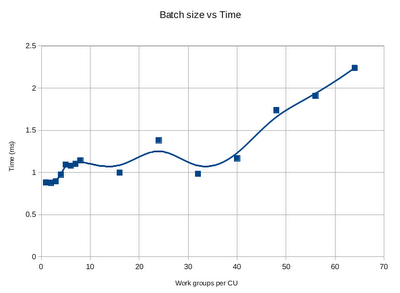 The stuff below 40 is pretty much 1.0ms, the ups and down are just sampling noise.

So, anything under 9000 checks is wasting resources on this machine.

So whilst writing this post and after doing all the timing i revisited a tiny part of the algorithm - the heaviest bit of the SVD is the error calculation which involves 3 sums of products across all 8 rows. For the HD 6950 I got a 2x speedup by using a simple loop vs a parallel sum - calculate the products in parallel but sum them in series directly in registers, but only in 1 thread of 9. I just noticed the ALU usage was a bit low on the 7970, and I turned back on the parallel sum. Well what do you know, ALU instruction count dropped from 9500 to 5900 and reduced the biggest case above from 2.3ms to 1.7ms (which is closer to a linear scaling anyway).

Sigh, now to debug some older and far more complex code that is not working 100%.