Still have more fruit than I can use, so I made some lime marmalade. Added a pile of Habanero chillies as well, so it's pretty hot. Not sure what i'll use it for ... it's more like a lime + chillie jelly with a bit of bitterness.

Got of the infernal machines yesterday and got a bit productive in general, also did 3 loads of washing, mowed the lawn, started brewing some beer ... 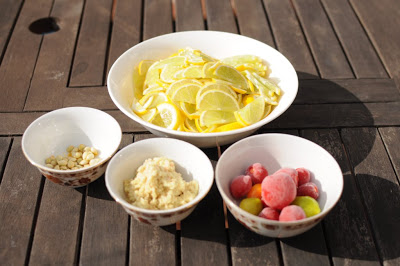 I had trouble geting the 'plate set test' to work - and ended up simmering it for a bit over an hour. But when I went to bottle it it started to stick in my funnel after the first jar and it turned solid enough to turn upside-down as soon as it cooled off a bit. In short I think I cooked it a bit longer than I needed to, but not enough to hurt it (made it a bit more orange coloured than it would otherwise have been).

Initially I only put 40g of habaneros, but I thought I may as well make it worth the effort and grabbed a few more from the freezer as I was cooking it. 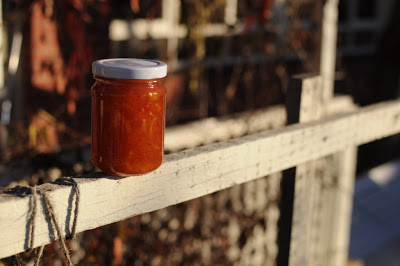 Has a nice sweet and intensely lime flavour with a generous hint of marmalade bitterness. It set solid - like jelly - although it is cloudy (mostly from the ginger pulp I guess).

The habanero chillies add a big kick - that gets more intense with each drop as they usually do. I had some tiny amount with kabana and cheese on crackers and it worked pretty well. Yet to try it on toast with coffee ..

It looks and smells like a nice sweet marmalade, but a corn-kernel sized piece is enough to set your whole mouth afire.