Handed off the prototype i've been working on for the last 8 weeks to the project manager last night; fairly pleased with the result in the end. But given it was a bit of a slog and I will switch gears next week back onto algorithms (yay, and OpenCL), today seemed like a good day for a break ... and to catch up on some preserving.

The citrus has all gone crazy this year. 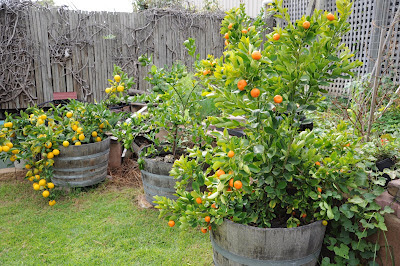 And this is after I've picked about 40 kaffir limes (actually, they fell off), and the bowl of kumquats in the next photo. I juiced the kaffir limes last week and ended up with about 700ml (and a whole lot of rind in the freezer), although about all i've found to do with the juice is as a scalp/hair treatment. The lemon tree in particular has been so loaded the tree itself is in fear of falling apart. But they're not quite ready yet - they're only meyers anyway, so are fairly sweet - I've already tried some by peeling them, separating the segments and sprinkling with sugar. Tastes pretty close to grapefruit actually, although not so bitter and thus a bit nicer. 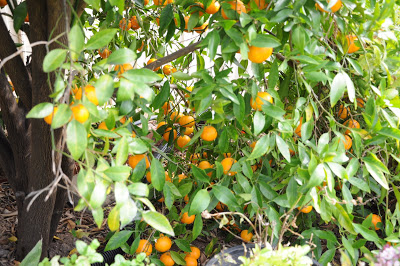 The mandarine tree still has plenty on it too - we've been eating them every day and giving away bags of them but you'd barely tell looking at the tree. Most have them have been nice and tart and juicy too. 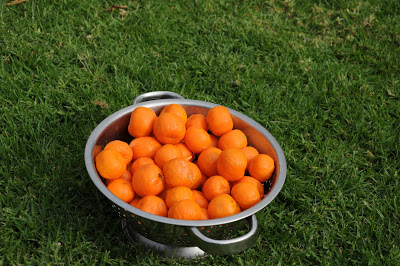 So what to do with these - they surprisingly go a long way for such a small fruit. I had previously done some brandied kumquats which a friend particularly liked, so I thought i'd start with that - and give it to him as a birthday present. 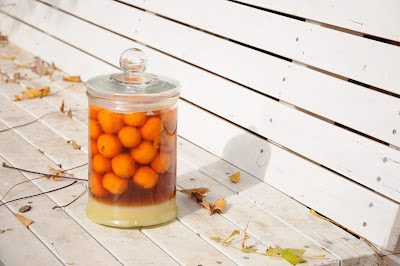 I used a recipe I found some time ago but haven't been able to re-find: equal parts by weight of kumquats, sugar, and brandy. This is a 2800ml jar, so i've got about 900g kumquats, 900g sugar, and 900ml of brandy. I got some cheap glass jars at a $2 shop, and they worked pretty well apart from some pretty cruddy seals (but they'll do). The sugar will take a few days to fully dissolve. After about 6 months you get something that takes pretty much like a citrus version of a tawny port - obviously quite sweet but with a fairly balanced flavour of tart & bitter as well. 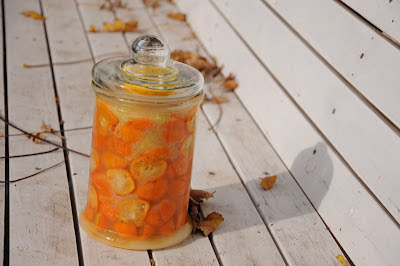 So I still had a few left over from the initial picking so I scoured the net for some other ideas - last time I had a decent crop I made some marmalade, but I still have plenty of that left! (from 4 or 5 years ago) I thought i'd try preserving them like lemons, so a good cup-or-two of salt later, a bit of lemon and lime juice, and some stinging fingers and there you have it. I really have no idea if these will work at all, but apparently they're good for something after a few months. Based on something approaching this recipe (although "some salt" is hardly a useful fucking measure ...) together with this one for lemons from The Cook and The Chef. Who knows if i have too much salt, but if nothing else it looks nice. 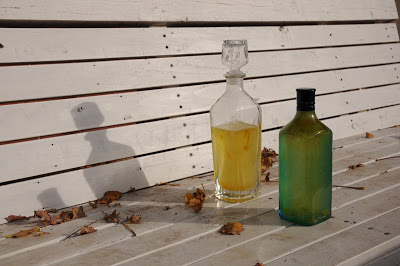 And finally my lime tree has been dropping limes enough that cooking can't keep up with them, so I wanted to make some lime cordial ('syrup' for you yanks). Again this is something that goes a long way, with 7 limes I had 2l of cordial (I usually mix it about 6:1), but it's a really nice summer drink. Pity it's a long way from summer. As there are more ready to drop I will probably make ice-cubes of it next time. I used this recipe although I only used 1kg of sugar, and bottled it whilst hot without straining. The old lady had a great recipe from her Green and Gold recipe book but she threw the book away years ago ...

And yes, it's yellow, but it's still all lime juice, which was a nice shade of green going in. Although I added a bit of lemon zest, and most of the lime zest was also fairly yellow as the limes are proper-ripe. I normally leave all the zest in as the sugar more than makes up for any bitterness they might add, and it looks nice.

I also have a very small number of west-indian limes - the very small ones with seeds in them - so i'm not sure what to do with them. They are super-tart though.

Bombay Sapphire bottles with the labels removed make very nice storage bottles too. Must get some more since I have all these limes handy (for the gin that is ;-), although it's been a bit of a dangerous drink for me lately (it's just too easy to sink them down).