Although I'm pretty knackered after a week of hacking on android user interface and REST stuff, a few things fell together near the end of today so I felt like I had a bit more energy to poke around jjmpeg on android.

I converted most of the rest of the binding to use integers as a pointer rather than bytebuffer's and after a bit of debugging managed to read a frame in ok. I'm still holding out on the AVIOContext stuff as it's a bit of a mess. 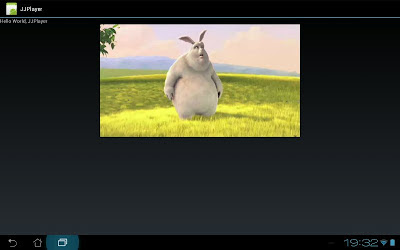 Using integers and looking up the value as a member variable on the lowest concrete class works pretty well. In some cases it even simplifies the binding as for example I don't need special 'object holder' classes for in/out parameters. I got sick of trying to get the horrid mess of a binding generator to work for all cases and hand-coded these in/out functions as well: it's only 3 calls and a lot less work just doing it by hand than making the generator handle all cases.

Performance doesn't seem terribly hot, but then i'm not au fait on the myriad of ARM compiler options in gcc. And in any event it looks like my build script had a bug and only built using the defaults anyway (ok, so i fixed that whilst typing this and it's a bit faster, but well who cares anyway, it's not the goal to beat the hardware decoder at mp4).

I noticed that I branched for 0.10 before i'd finished off some of the api, so I will have to back-port a bunch of stuff to make it more usable.

I'm also considering simplifying the object model significantly: at the moment 4 (6, if i want transparent 64 bit/32 bit support) classes go together to make 2 objects for each C object; which allows for automatic garbage collection so make the api more java-friendly. It works quite well at least on the oracle and openjdk jvm's, but adds a bit of extra crap to the binding. I could simplify it down to 2 (4) classes and 1 object if I force the developer to manage memory explicitly. But what I have works, so I am in no rush on that one. One doesn't need to create very many objects to decode a video, so it's hardly a big overhead. And although freeing them explicitly isn't that much of an effort either: it's still nice to have it work automatically.

My local code-base is a bit of a mess - I couldn't get netbeans to open the android project as an android project properly until I created a new directory, created another blank project with the android tool, and then copied the source around till it worked. So it might be a bit of hassle copying this all back to a versioned tree and checking it in.