So yesterday I managed to get away from the machine for most of the day. Actually I got a bit sunburnt pulling out weeds and doing some gardening. Also mowed the lawn and did some work on the compost pile. And planted some winter vegetable seeds in pots: I have never had any luck whatsoever with winter vegetables (if I ever get the seeds to germinate they struggle and usually get eaten to death by bugs), but maybe this time ...

Well, I've been watching SBS's latest food show lately - Luke Nguyen's Greater Meekong - with all the advertising they fill each half hour slot with now it really needs to be a full 1 hour show - but Luke is a good presenter and although the editing could be a bit better he always finds interesting food and people who want to share it.

This week he had some chick-pea 'tofu' soup thing from Burma. The soup itself looked a bit heavy for my liking but although i'm no vegetarian I'm partial to some of the fare they like. I also like to learn about ethnically or geographically important staple grains. Actually it's a bit of a bummer looking for recipes with such ingredients because all you come across is vegatarian and vegan nutters who are looking for a filling main meal - not a tasty snack or accompaniment. It also involved a great deal of work - from a stone grinder, to muslin cloths to a giant stirred pot.

Because i'm lazy, the overnight soaking of the chick-peas seemed enough work for me, so instead I just blended the fuck out of them. I first tried topping up with water but that wasn't enough and I lost track of just how much I added. But I blended for at least 10 minutes and ended up with something akin to cream at the end of it. Enough blending that you could barely taste the fibrous material you otherwise end up with. 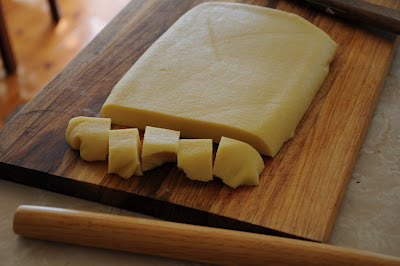 Then I cooked it on low with a good dose of salt and a bit of tumeric (as recipe I found suggested). At this point it was pretty much just making polenta. The old man used to make that and toast it on the AGA (which doubled as our only source of hot water as kids) all the time, and we all used to turn our noses up at it; and unfortunately I never learnt to make it before he died, so I had to learn how to make it by trial and error. It's also not something I make very often so I usually forget the finer details ... but I guess 'stir constantly until you're sick of it' pretty much sums it up. It didn't go quite as hard as the polenta i've made, but then again maybe it had more water in it. By the time it turned into a bubbling lava-pit my arms were tired so I decanted it into a cotton-lined dish and let it cool.

It looks and smells like polenta but tastes a lot better. Texturally it was fine: soft and creamy with no hint of fibrousness, I'm sure not straining it affected the result but what I ended up with was quite ok.

I diced and fried some up and it was pretty much like tofu in texture on the outside, moist on the inside, and tasted ok just on it's own (closest flavour I know would probably something like a papadum). Tofu isn't something i'd normally buy since it's pretty bland and I just don't know how to select it. The pre-cooked stuff is dry in addition to bland.

Since I also made up some hummus with some of the chick peas, I had a bit of a anti-pasto arvo snack. Some olives, hummus, biscuits, fried tofu, chilli sauces, and some fresh chillies as well (and beer and wine of course). 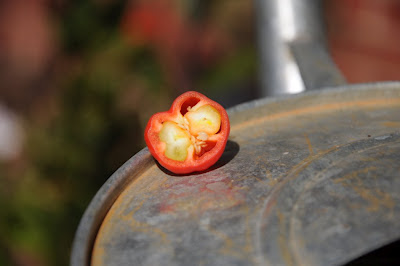 Amongst the chillies I picked I scored a triple-habanero from the garden ... I get doubles fairly often but this is the first triple. Unfortunately my habanero crop isn't so great this year, but I noticed I still have a few hundred (~5litres) in the freezer from last year so i've started trying to use them more often - but as they are so potent, I'm sure I will still end up with more than a winter's supply worth!