So winter has sort of started here - although we had a it of sun today with a bit of heat in it. It tends to stick from about ANZAC day - the 25th, and we're only a few days early.

Which means: I don't have much to do apart from cook and hack. Still a bit tired from the previous week so I didn't get into much but I had enough time between drinks to have a look.

Yesterday I spent a few hours playing around with the Manpages source. I seemed to get a lot done but after looking at what I came up with, it didn't seem to amount to much ... just a bit of GUI re-arrangement to make it take advantage of a tablet. I don't need man pages on a tablet, but I am thinking of how to do a nice interface for accessing documentation as it does seem something the tablet form-factor might actually be useful for. Starting with Manpages just saved me a bit of faffing about. 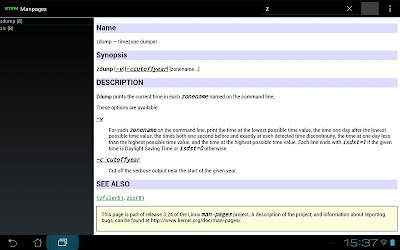 I first started playing around with the search function: making it use a searchview, and changing it to filter the list of man-pages rather than coming up with a redundant 'shortlist' completion list. And voice search, although it really just doesn't work well for unix commands (grep == brett, great, grit, etc). Probably the stuff that took me the most time was working out how to get the search box to work nicely - getting rid of the onscreen keyboard when it isn't needed and so on. But eventually I have that behaving quite nicely.

The filter stuff isn't very well documented, but it wasn't too difficult to work out. The built-in list filtering has a silly stylistic choice of overlaying the list with a very large label of the filtering string, but it was only a couple of lines of code to remove it by doing it manually. I implemented it using a tree, so an interactive prefix search runs in real-time with no trouble at all.

I'm still only experimenting but if it goes somewhere this might end up another project to divide my time (an android version of 'ReaderZ'?).

Today I thought i'd instead have a poke at jjmpeg. I'd already had FFmpeg building from source using the NDK, but not gone anywhere with the jjmpeg stuff.

I'm in two minds over this - I don't really need it, and am not particularly interested in writing a video player, although the free ones on the market are pretty crap (and they expect me to pay for ffmpeg? I don't think so tim ...). But it might be useful for work and it's a good opportunity for some self education on mobile hardware, opengles, and so on.

So i've branched jjmpeg, and started work on an android specific port: things are different enough that at the moment that branch will only build the android code. For example I am linking directly to ffmpeg's libraries so I've removed all the dynamic loader stuff.

I've also decided the whole library will be GPL3 - for a couple of reasons.

Secondly, many android developers seem to be utter leech-tards, and don't mind wrapping anything they can get hold of in a new name and trying to make money off it. I don't really need to contribute to that in any way - after-all I didn't do all the hard work which makes jjmpeg work.

And finally, and related to the previous: the LGPL requires that all the LGPL code be replaceable by the user. But with android this is quite a difficult process which prejudices the user. It's not like GPL will make building with the NDK any easier; but at least it means those capable of doing so end up with more than just a new makefile for ffmpeg which is about all the LGPL requires.