Had a mini hack-fest today, and whipped up an e-pub backend for ReaderZ based on CSZ. 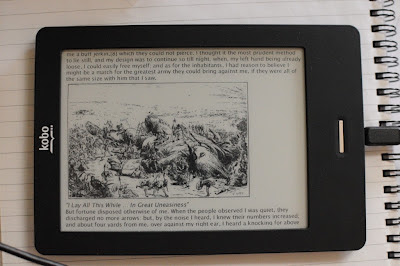 I added very basic img tag support as well, as is obvious.

Apart from the code to parse the content.opf file from the .epub archive which was fairly small, I spent the most time trying to work out a URL handler for a made-up 'epub:' protocol. I copied the way the jar: protocol handler distinguises between the base archive and the filename using "!/" - this is so that the normal url resolution mechanism work. But I also wanted to resolve by the manifest ID and I use the url fragment for that (although in hindsight I probably don't need it). But anyway in the end it wasn't much code, and having it there made everything 'just work', which was nice.

I also had to deal with all the crap XML brings along: i.e. dtd resolution.

The actual viewer is a bit unwieldy as it works as a set of html pages. So you need to pan around to read each 'page' (i.e. chapter, or whole book), and changing pages flips between the items in the spine (i.e. chapters or whole book). To do better than that I really need a paginating layout engine: which is something for later.

I have no svg support not surprisingly, so title pages which are pure svg come up a re-assuring blank.

Still a bit slow opening new chapters, but what can you do eh?

It's all been checked in to ReaderZ and CSZ.