I was wondering how to get a decent user interface with only a finger ...

I came up with the idea of sensors (no doubt this is what everyone else already does, but I haven't used a touch device before let alone coded for one) that I can attach to a gadget, and the gadget can then decide what to do.

I have two types of sensors, drag sensors and press sensors. Drag sensors override any press sensors, and come into action once a drag has started. It only started after a certain threshold of movement is exceeded. Press sensors only activate if a press is detected without a drag. Additionally they can handle long (>300ms) or short presses separately.

So for a PDF viewer, I came up with the following 'soccer pitch' of sensors ... 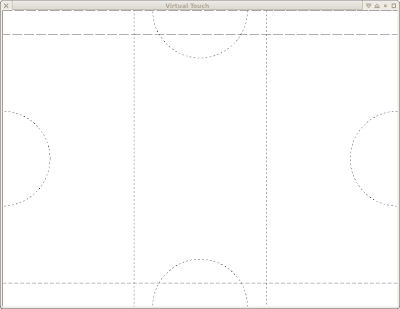 As far as this goes and even without implementing the panning buttons it makes a fairly comfortable PDF reader out of such a small screen. I might also need a way to go back to the top of the page but one-screen over, and back to the left of the page but one-screen down (and backwards of those?); although there is only so much space for such hidden buttons to be easy to use. I could either use the corners, or perhaps just do it based on exceeding the limit of the existing paging buttons.