Well I got the PDF reader working on the kobo. The binding library 'just worked' thankfully, so I just cleaned the code up and worked on some performance issues. 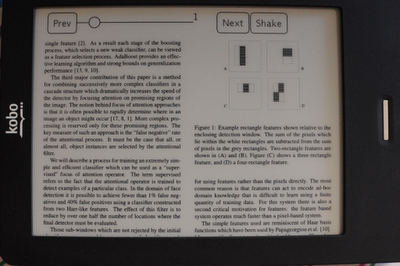 Using a custom BufferedImage which talks directly to the ByteBuffer turned out to be very slow on the kobo jvm - about 10x slower than just copying the ByteBuffer to an RGB565 BufferedImage in a manual Java loop. So I just do that ... the images are only the size of the display so memory isn't a big issue.

It loads and renders a page in about 0.3s, so that is fast enough. I couldn't work out how to get it to 'fully' refresh automatically very cleanly so I just added a button to do it. Panning is a bit slow, even with monochrome update mode: OTOH finger events aren't lost when you press-slide-quickly-release.

For comparison here's the same text with the built-in viewer. 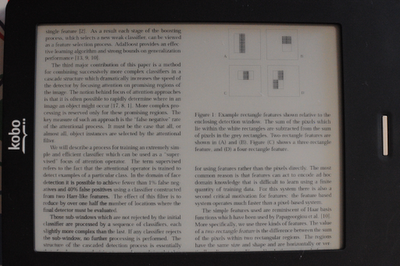 I think my last mention if it was a bit unkind - it isn't that bad, it turns out I had been reading a scanned paper, which tends to render poorly in everything. I found out that you can change pages whilst zoomed, although you either have to scroll off the side of the image first, or bring up the menu - and while the menu is up you get an icon of the 'zoom area' taking up a good chunk of the screen, so they're both a little bit clumsier than they might be. And some contrast enhancement wouldn't go astray when viewing text (although IMHO mupdf just renders text very well).

Incidentally, the dark square you can see in the lower left is really there: it's left over from an e-ink refresh after the zoom-preview-box is removed.