So the projects of the ...Z's continue.

I played a bit with the thinlet toolkit - I managed to get some stuff to display, but I had trouble with the refreshing and mapping the input events properly. It also lacked some features and had a weird-arsed reflection based event system.

So, although I really didn't want to, I started from scratch with a 'simpler' toolkit. Which wasted all of today and half of yesterday ... 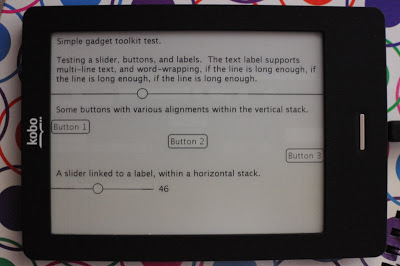 But after quite a bit of jiggery pokery I have some basic widgets working (as usual, it's the layout stuff that's a real shit to get working at all, let alone correctly). All events are handled in one thread, and all rendering his handled in another - so although you sometimes get artefacts, it ends up catching up: and the interface remains quite responsive in the meantime (so it should, there are at least 5 threads working away so nothing needs to block). The touch-screen does seem to have some issues with some areas of the screen but I don't think I can do anything about that.

I also worked out the input events for the two buttons (home and power) - for some reason when I tried it previously I got nothing. So when I get to that I can hook those up too.

The paint manager isn't terribly efficient - but it seems to be 'good enough' at this point even with piles of printf output. i.e. the cpu on the thing really is rather gutsy particularly compared to the slowness of the e-ink display.

Next time I play with it i might look at a text reader. Unfortunately paginating isn't quite as simple as i'd like - I wanted to read it off disk on the fly: but character set and word-wrap stuff makes this really messy. So to start with it might be based in memory.

Update Whilst I was writing this I had a bit more of a play. If I turn off anti-aliasing and use black and white for everything, the display updates much faster and with fewer artefacts.