Well I kept poking away at the XHTML/CSS stuff, for want of something better to do. I had a couple of wins along the way.

The cascading and inheritance is working somewhat better now, and I added a few more properties. Given that I'm not very familiar with all the various rules, I think I have a fairly efficient resolution mechanism by indexing various bits and pieces. The layout system is still crap, and very very incomplete, but at least I have baselines aligned now. 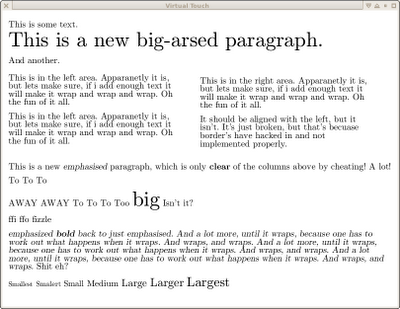 This is a totally contrived example, everything apart from the text layout and typefaces are hacked in one way or another.

I tried it on the kobo ... it's still fairly slow, but it's better (I think: TBH i can't remember what I tried the other stuff on). Still hampered by the text layout though.

For a 200k file (which is mostly just <p> elements), scanning the file, resolving the properties and generating the box list takes only a fraction of a second. I'm not trying to resolve or use very many properties though. About all i'm using `in anger' are some of the font-* properties.

But then performing the layout (as a single page) takes about 7s (once the jvm is warmed up), which is mostly due to TextLayout. I will have to try it with a simpler font than the one the JVM comes with.

Rendering is fairly ok (relative to the e-ink anyway) and all i'm doing is painting every textlayout in the whole tree ...

I uploaded it to MediaZ anyway, in the new CSZ module.

Hmmm, I should really take a break from hacking for a bit. But i'll believe that when I see it.