As a test routine for some low-level code I threw together a little test harness of a complex wavelet de-noise algorithm.It was based on some papers and demo code from this link (which appears to be dead now ... and has been for some time at that). It's just using a very simple threshold-and-scale of the wavelet coefficients, so apart from the relatively expensive Dual-Tree Complex Wavelet Transform it is simple and cheap to implement. The 1.7ms reported is the time to forward transform, apply the thresholding, the inverse, and download the (float) image to Java and convert it to a greyscale byte image. (I know, the screenshot should have been a png, so it's not entirely clear here ...) 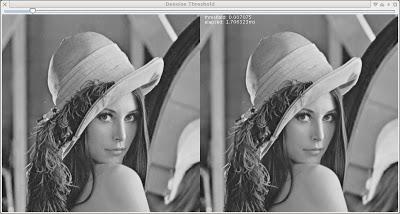 This has nothing to do with what i'm working on but I thought it looked quite interesting. It preserves edge detail much better than techniques like a median filter or a Gaussian blur, and introduces fewer artefacts compared to the adaptive blurs i've seen. According to that now-broken-link, using the complex waveform produces subjectively better results compared to the DWT.

Perhaps i could use it as a processing step: if you already have the DTCWT coefficients it's a cheap additional process. Somewhat like doing a convolution in the frequency domain, it's basically free if you're already there.

I also played a bit with working out a sharpening algorithm on the weekend - I couldn't really find any simple papers: they all relied on adaptive processes, and the results reported didn't seems worth all the effort. In the end all I did was linearly scaled the coefficients by some made up numbers. Scale up for the highest frequency components and scale each subsequent wavelet band by 1/2 of the one above.

Unsharp Mask vs Wavelet Sharpen by scaling coefficients with approximately (but not a very good approximation) similar adjustment. Unsharp Mask is on the left.

The result is pretty much the same as unsharp-mask, but it only takes 1 tuning parameter instead of 2, and subjectively it appears to me to a smidgen less noisy. But I need to experiment a bit more, one would expect to be able to reduce the noise compared to unsharp mask and I think my low frequency scaling factors are out and it's affecting the tonal quality too much.