So I had some luck with a bit of fiddling with the scaling function for wavelet sharpening. And managed to get both sharpening and smoothing working at the same time. I'm fairly happy with the results.Update: see also a further post on using the DCT in a similar way.Update: I've now implemented a version of this in ImageZ, see the follow-on post

Ok, first the raw Lenna input image I used - converted to greyscale by Java2D. Just to make comparison easier and to add another pretty face to the page. 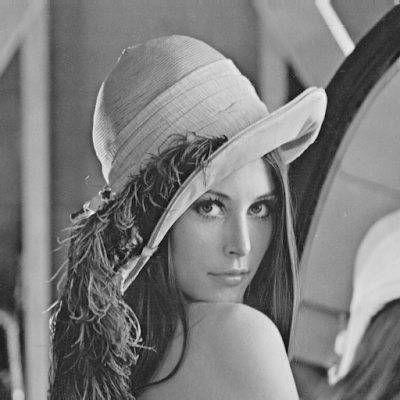 Now, with the sharpening ramped right up. As you can see it's pretty much the same as using unsharp-mask with a well-selected radius and a medium weight. And like unsharp mask it tends to emphasise any noise. 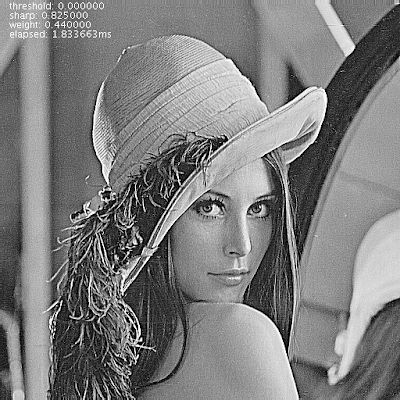 Unsharp mask/Wiener Deconvolution can still work better if the image is simply de-focussed as they have a PSF function to estimate the amount of defocusing.

Now, with the same settings, and also de-noised very heavily. Despite the obvious and unnatural looking heavy processing the edge sharpness and most of the detail is still retained rather well. Most added artefacts are relatively smooth and natural looking too. If you've ever tried using a median filter or a selective Gaussian blur, you'd know they pretty much suck at retaining any texture detail or clean edges. 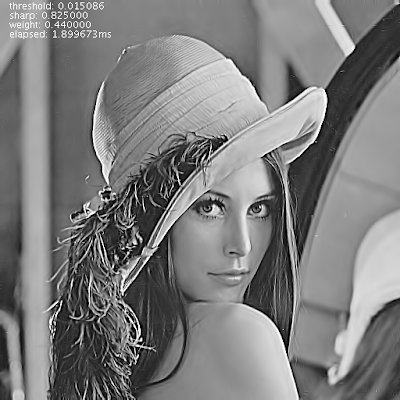 And finally, a more natural level of sharpening and de-noising. 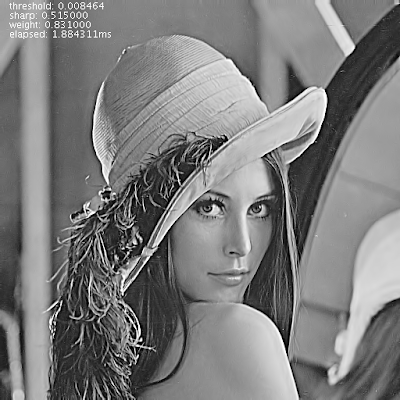 Pretty happy with it given how simple the maths is. I've over-emphasised some of the results by using high values, but a smooth variation in results between the original and any of the extreme values is possible.

Two steps are applied to each complex coefficient in turn in a way that can be done whilst the coefficients are in registers. So if you have other processing going on it's essentially free.

C the complex transform coefficient;abs(x) returns the magnitude of the complex number x;T input threshold from about 0.01 to 0.001.

This zeros out small coefficients - which are apparently likely to be noise - and scales the rest to their original range.

bandcount is depth of wavelet transform;nband is number of the band (0 is the highest frequency);scale input sharpness 'gradient' from 0-1; andweight input sharpness weight from 0-1.scale is a general 'sharpening factor' setting, and weight specifies how heavily it is applied. 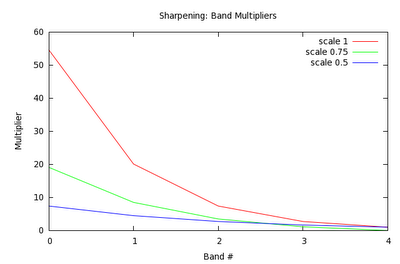