I thought it about time to fix a few little bits and pieces with ImageZ that I actually use ... so I tackled some of that. I fixed some of the wiener deconvolution code - so that odd-sized images work for instance. I also tried thoroughly thread-ising it, although I only got a modest performance boost: jtransforms is already using multiple threads for the FFT which is the expensive bit. 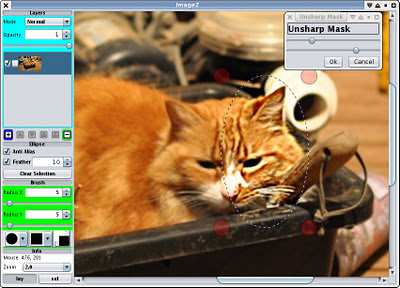 Unsharp mask in a feathered mask. I dialed it up to make it obvious.

Unsharp mask is something I always find really handy, so I finally coded that up too. Rather than start with the mess of the Gaussian filter code I already I have i coded another one from scratch. A bit simpler so I will merge and share the code at some point, or at least put it in a common place. It also mirrors the edges rather than clamping, which seems to produce a more natural response on the edges.

There are still a couple of things I use the gimp for that i'd rather not have to, but I guess that can wait for another day.

I really need to get out of the house this weekend, but i've pretty much pulled up all the weeds, it's been raining enough to water the garden, and the neighbours were using a chainsaw this morning. So I just found myself stuck at the computer again ... and I might watch the rugby on soon too.