Well, it's been a weekend for disappointment. Damn Wales were unlucky ... I'm actually not sure who I want to win out of New Zealand and Australia today - the kiwis just demand so much respect it's hard to barrack against them; i'll have a few drinks and go for whom-ever is playing the best I think. If they're both on their game it could be a real cracker of a match. But I digress ...

So, again google has decided to muck about with something which pretty much didn't need fixing. Last time they messed with news.google.com.au I wasn't particularly happy but continued to use it fairly regularly as the changes were just cosmetic usability issues but I think these latest changes are going to be too much on-top of a few other reasons i'll detail later.

TBH I can't believe i'm devoting so much time to such a post - it really doesn't mean that much to me on it's own - but in the over-all scheme of things these small (and not so small) issues do mount up. It turned into a bit of a mega-rant at the end and the language deteriorates as it goes ...

First, the existing google news as I see on this laptop ... starting with the top of the page: 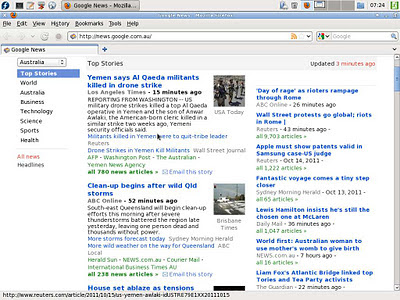 And then the middle of the page: 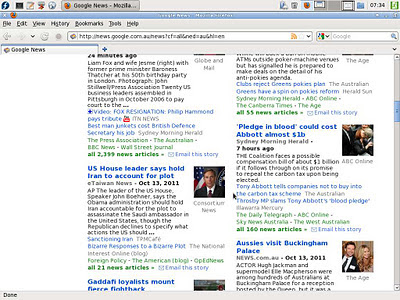 First thing: Yes I (very much) like to use Bitstream Vera Sans as my font for everything: coding, and reading documents. And even then, only 1 specific size works the best (not being able to do this is the single specific reason I wont even bother to try Chrome). So all you designers painstakingly choosing your typefaces and font sizes: you're wasting your time, if one can't read the information it is worthless. Most sites actually work fine with this, although a few have some minor formatting issues (mostly text overrunning the bottom of iframes).

And secondly I do have a crappy 1024x768 IBM laptop screen. Although few laptops have resolutions to match anymore, plenty of phones, netbooks and iLandfill slabs don't even get this far.

Ok, now on to the layout. There is still a big wasted load of space on the left that they added in the last major layout update, but basically most of the page is used for information content. Each story has a few alternative links from common (and sometimes not so common) news sources, an email link, and at most a single picture. Mouse-over's (at least today) are restricted to highlighting the link which is about the most i'd like any browser to do with them.

Now, to my suprise, I was greeted with the following page when I opened google news on my other laptop this morning: 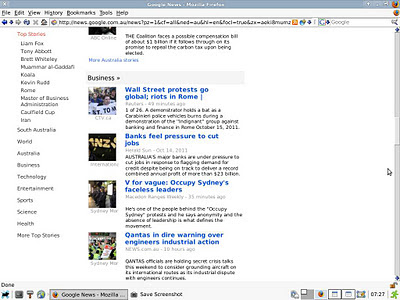 Hmm, something doesn't look right. First, everything is in one column. A huge chunk of wasted space on both the left and the right now. And what's more, the real killer feature of google news - at a glance being able to see the 'feel' of the media reporting of the news story is conspicuously absent. There is only a single link to a single news source.

Actually I couldn't work out how to find anything more than that: I normally browse with Javascript disabled on that machine - because I don't like my lap burning, nor fæcebook to know where my mouse is whilst i'm reading a news article on an unrelated site - and all you end up with is a single link.

Enabling javascript and reloading, and I discovered a huge pile of annoying mouse-over shit (AMOS). 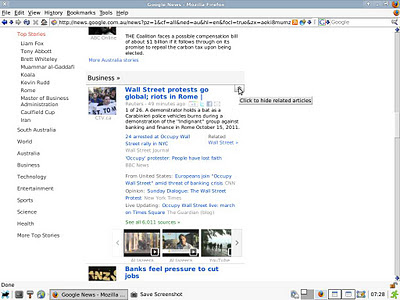 So, now you actually have to click an ugly button to bring this stuff up. Hoorah, now we have popup-pox infesting web pages too, just loverly[sic].

And on-top of that it's now somewhat more difficult to decipher - it is trying to add extra information to the other links beyond their titles. Do I really care that it is an opinion link? Or why the special notoriety of articles "From the United States [of America]"? Is their opinion somehow more important?

So ... I did a search and apparently the cog button is the settings icon these days. Who'd knew ... (actually I thought it was some logo, not a cog for that matter: it looks more to me like a high-contrast themed variation of the xfce main menu button) Of course, none of the buttons function if you have Javascript turned off ...

So to the rather bare settings. 1 or 2 columns, and auto-refresh. Færy-nuff, lets try ... 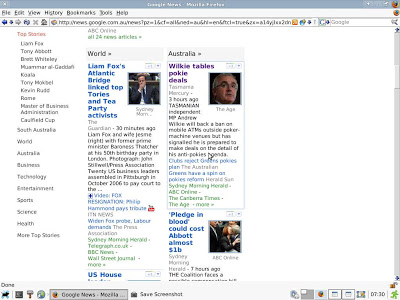 Oh hang on. That looks broken. Why would anyone possibly want to read the site that way? Not to mention more AMOS to 'enhance the experience', and the same big blank section on the right.

At least the killer-feature reporting-at-a-glance is back, but there's just no way anyone would labour through such a horrible interface for that.

Oddly enough ... if you disable javascript ... 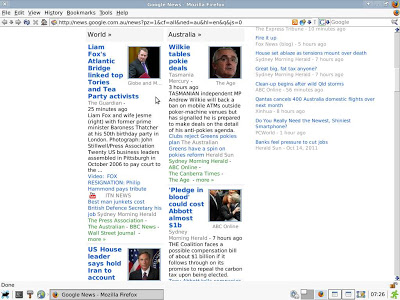 You get the right-hand side-bar back, and thankfully the AMOS disappears as well.

For some reason the top of the page has this non-functional news selection slider thing stuck to it.

I can only think that google has a particular idea in mind here: if you're not using a 24" widescreen monitor, then you must be using a phone or some iLandfill toy. Although that doesn't completely make sense since the new site would be even more useless on phones so they must have 2 separate stylesheets/designs for each one anyway. So why fuck it up so royally?

More and more of the web requires javascript - whilst usually using it for pointless crap like implementing buttons in a non-recognisable os-agnostic way (those damn designers again, thinking they can redefine 30 years of progress in human-computer interaction on every page). I find this whole idea of javascript everywhere very questionable security wise - a web page can load 3rd party application which can then send information (e.g. where your mouse is) to any other 4th party without your knowledge. And hence more and more web pages are being turned into 'crapplications'. They're slower, uglier (and certainly not 'theme aware'), and more clumsy than local applications, but they're much heavier cpu and data wise compared to remote ones. It also closes off the avenues for using alternate browsers: having to have a very high performnace rendering engine and javascript vm is a massive barrier to entry (e.g. even firefox 3.6 is ruled out of many sites now).

Welcome to the 3rd age of thick-client computing. All the local computing power required to run local applications, combined with the speed, grace, availability and security of remote ones. Oh boy! Hold me back!

No news is good news?

On a personal note i've been trying to avoid reading the news too much anyway and google news itself. Its always the same old shit. It's mostly depressing, or at best it's just click-bait to rile you up.And google news's aggregation algorithms are pretty much like watching TV based on the ratings: not the sort of experience I'm really after. For example, apparently `funniest home videos' the most popular show in Australia? Do I really want the bogans who watch channel 9 deciding what news makes the front page (depressingly the truth is of course that yes, they already do). With such an ignorant population, no wonder 'no more boats' is a (an almost) winning election slogan around these parts, or that the global warming denialists get so much airtime. A timely reminder - and exactly what I thought the first time I saw the advert with the sound not muted (which is how I watch advertising if i'm watching 'live' tv, although my tv mute button wore out ...).

Still, I do like to check at least once every couple of days - least i become one of the ignorant masses if nothing else. Or to fill a spot to give my brain a rest or whilst waiting for a routine to run ... Unfortunately now I use Java there's no more waiting around for compilation - the 50KLOC bit of code I work on compiles and launches the application from scratch in about 1/2 a second (ant doesn't include resources properly in the jar without a clean rebuild - and building jars is the single terribly weak fucking reason to justify it's utterly shit and astronomically painful fucked up existence - so I have to do it every time when working on opencl code. Fucking adjective!).

I guess I can use fairfax for the little Australian news i'm after (democratic politics died for me when Howard went to war, and without that what is the point of listening to those arseholes - and without the politics there's fuck-all left), The Guardian for Europe and summaries or links in a few blogs I visit will do me from now. I gave up on The ABC months ago - which should really now just be called `The Opposition Says Sydney-Siders Gazette'. Even SBS TV news has been shit for ages, since they cut their budget it's little more than a patchwork of cheap stories from other services (many barely trying to hide themselves from the happy-story pro-war/pro-usa propaganda they are, like some of the BBC stuff from iraq/afghanistan).

Barely any of the services do any local news at all. Most of it is broadcast/published straight out of Sydney or Melbourne. Not that much of import happens around here, but sometimes you do need to know about local stuff.

One thing google news showed me (until now) is just how much of the news is just the exact same story repeated ad nauseam, so at least I know I wont be 'missing out' on anything by not using it.