Ok now the weekend's over, time to calm down and stop ranting ... ;-) Bummer about Australia losing though, apart from some real shockers right from the kick-off they did calm down and start playing fairly well. When they did have a good run - and they had a few - they were let down badly by not enough support at the breakdown. Still, NZ deserved winners ... And channel 9's race-caller sucked the whole way through.I just found this very well put together site about using the discrete cosine transform (DCT) to do threshold de-noising in a manner similar to the wavelet threshold denoising and sharpening I mentioned before.DCT Denoising

Very slick, complete with well formatted mathematics that puts most microsoft-word based papers to shame, GPL3 source and on-line demo!

I downloaded the code and modified it not to add the noise and tried it myself on Lenna: 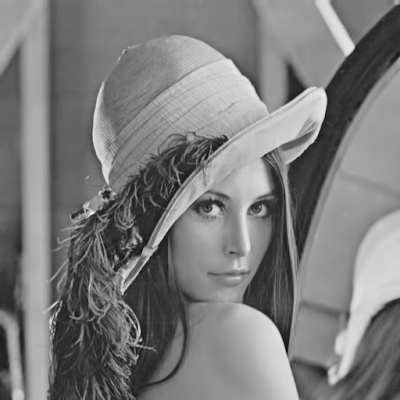 The results are effectively the same as with the complex DTCWT version for moderate settings - visually even the artefacts it introduces are the same.

In the form provided however it is somewhat more computationally intensive - it's sliding window is offset by single pixels, and the way the C++ is written isn't the most efficient. I wonder how well it would work with a hanning window and 4 pixel offsets. I wonder if it can also sharpen - from a quick search it looks like it can.

Very interesting, and it also works with colour images in smarter ways than just processing each channel separately.

When I get the time I'll look at coding this up for ImageZ and socles,

(I found the option to disable 'lightbox' mode).Update: Just another advert for Java. It looked simple enough so I coded up a version in Java using an 8x8 DCT and it runs single-threaded over 3x faster than the C++ version, including the JVM startup or over 4x once it's going. Rather than generate all 255 025(!) patches, transform, threshold, inverse, and merge, it fully processes a single patch each time: requiring that much less DCT memory (i.e. rather a lot - over 62MB less). So that's 0.9s vs 3.9s for this 512x512 mono image. Although I can't fathom why my version needs 1/2 the threshold to give a similar result ...Update: See follow-on post where i mention implementing it in OpenCL for socles.Update: I've now added it to ImageZ. DCT8Denoise is the main entry point. I changed it to work with separate colour planes rather than planes stored in a single array, just to make it easier to invoke from ImageZ. It's only single-threaded atm.