After hitting the bottle with a couple of mates last night I ended up sleeping on the couch (too lazy to make my bed after washing the sheets), woke up about 6:30 feeling a bit ordinary but I thought i'd get some hacking out of the way because I was awake and couldn't really face too much else.

I continued to work on removing the Piccolo2D stuff - which I completed. Now i'm just using plain Java2D for the rendering. Of course, one of the big reasons I did it was so I could zoom without making the handles scale as well ... and of course I forgot to implement that so it all zooms anyway. No biggy ... at least it seems to work. And it should be relatively simple to implement it.

I still need quite a bit of code to implement interesting interface behaviour ... but at least it is no worse than the Piccolo2D stuff was before it. 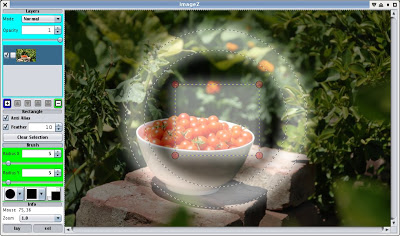 As part of that I visited the selection code. Some time ago I had the idea of being able to show the current selection using a shadow mask - including the current 'feathering' and so on. So I added that - all 4 lines of code required for that. Well I think it looks pretty cool, and if you have a fast machine it updates in real-time as you edit the selection even though it uses a Gaussian blur for the feathering.

Update: Since I think there's now enough functionality to move it beyond the simply embarrassing stage, I've packaged the first public alpha release too. See the downloads page on the project, but don't expect too much.