I had a few hours to play with this morning and I had another look at the crop tool for ImageZ. 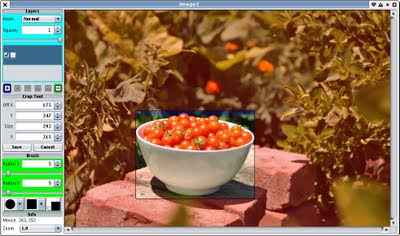 It lets you change the top/left/bottom/right edge with the pre-lit 'handles', or drag the whole rectangle around clicking inside the box. Clicks outside of the box let you drag to select a new bound. So pretty simple/obvious interface, although I couldn't be bothered implementing the corner handles.

So I had previously decided that Piccolo2D just doesn't quite fit this application - the need to have user-interface elements which don't scale with the zoom setting was the deal-breaker. Current code that uses it has some very messy mechanisms to make it work - sometimes.

The new stuff just uses some custom objects and Java2D to do the rendering and a very flat/simple 'scene graph'. So far I haven't even added any sort of optimised rendering although I probably will need to. Although right now it is fast most of the time (not so much when zoomed - but that was the same for the piccolo2d stuff too).

I also played with a slightly different event model - currently the current tool gets mouse events, but I decided rather than have the tool manage events of control-handles they can do it themselves. It wasn't much extra code to implement the event routing in the imageview class.

I think there's still a bit more work for the tool design before i think i'll be finished with it, but at least it feels i'm moving forwards with it. I will keep an eye on this as I discover what works and what doesn't and eventually clean it all up to a consistent and hopefully simple interface.

Probably the next thing to look at will be improving the brush mechanics though, or maybe fixing the super-affine tool - perhaps with that I will have enough to drop a jar.