Update I finally gave it a name and labelled the bottles - "Incendiary Tomato" sounded like a good name. I've also downed 1/4 of a bottle of this stuff with cheese and crackers or on my dinner, and it's really bloody nice!

I have a chilli or two from the garden and have been making a few hot(ish) sauces - tomato sauce with a few chillies thrown in to give it a pleasant kick, a hot sweet chilli and ginger sauce, and an apple, ginger, and chilli chuntney with much more of a kick. The latter is pretty nice, I took a recipe that asked for 500g of capsicum and 6 chillies and just used 500g of chillies. I think it's fairly medium-warm on the heat scale but a mate can't stomach it. I also tried a green fermented sauce (unfortunately `killed' that with too much vinegar) and have some red fermented chillies i'm not sure what to do with yet. 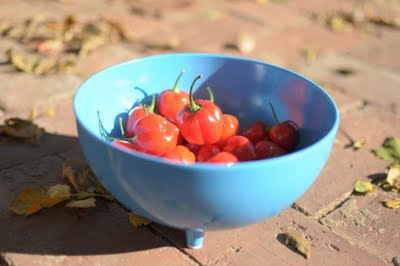 The habaneros are hitting their fruiting stride at the moment so I thought i'd try a hand at something with a bit more bite and less sweetness. I also wanted to avoid the vinegar flavour which had overpowered my last effort so I based the acid on lime and citric acid. I found a recipe that looked a bit dogey - based on a tin of tomatoes - but I had some tomatoes i had to use so I started with that and then spiced it up beyond recognition. For once I recorded everything I put into it, so i thought i'd share ... I pretty much made it up as I went and mixed a few ideas I really wanted to try separately but once it was in the pot there was no going back.

Cut the chillies into small pieces. Pound the whole dry spices in a mortar and pestle. Break up the palm sugar (I only did 1 tablespoon because i was too lazy to do another and used plain sugar when I needed more sweetness).

Put everything in a pot and simmer for about an hour - until the chillies are soft.

Use a (stick) blender to puree everything together. Don't splash your eyes.

Bottle in sterlised jars whilst hot. 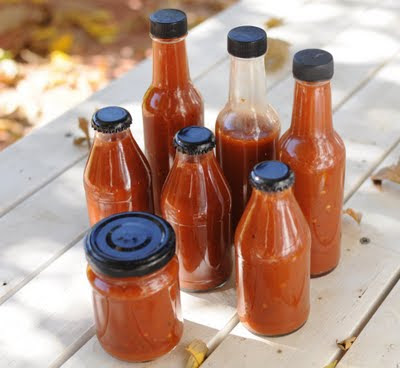 I'd probably rate it about a '7/10' for heat, where tobasco sauce is 5 (although it's been some time since I had any). Although the heat lingers much longer, and builds up the more you have. A teaspoon would be enough for a nicely burning steak.

I'll have to let it sit in the bottle a while to finalise the flavours but for now I think it has a bit too much pepper which over-powers the chillies; although it's a bit hard to tell since the bite over-powers the flavour on the initial taste. Possibly more mustard, ginger, and all-spice would work too, even lime juice. Maybe a little vinegar wouldn't hurt? I think the sugar level is about right (for my palette), as is the saltiness - both of which are required to bring out the flavours. It's basically a very strong, extremely hot tomato sauce.

I don't know how it'll keep yet - the acid in the tomatoes, lime and added citric acid should hopefully be enough since I wont be finishing the litre or so I made too quickly and this is probably one sauce I can't share with friends.

And i've got more chillies and ideas to try so it might be competing for condiment time.