Back to regular programming after the last rant ...

I ended up with some ageing/damaged fruit and after sitting there degrading for a week I finally pulled a finger out and made my first apple pie with the recoverable fruit. I'm not a big dessert person - I can't really remember having apple pie since I was a kid (although i'm sure I've had some here and there) - and it was never like this. 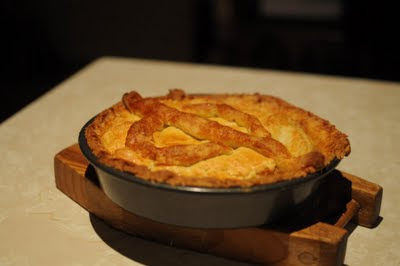 It worked out pretty well in the end; it tastes at least as good as it looks and quite possibly better. I didn't have any lemon so used citric acid with some water to keep the sliced apples from going brown - and I think that gave it a bit of extra tang. I threw in a few more spices too for good measure (vanilla, extra whole cloves, more cinnamon). Even the crust on the bottom was a bit crunchy - I tried a tip I saw on the Hairy Biker's a coupe of days ago, sprinkling the base with semolina to absorb some extra moisture. Although having never done it before I don't know if it made any difference. I used this recipe - although I had a hell of a time with the pastry. I just can't seem to get the hang of working with short pastry although it usually turns out ok.

I've been pretty busy hacking some OpenCL stuff of late - so busy i've barely left a keyboard. More on that soon I imagine, once I get a bit of sleep and remember it is just what i've done - and if any of it is worth sharing.