Bugs. The other kind.

My garden has been a bit under attack lately - I severely pruned some citrus so they are spouting wildly, I have a jungle of lettuce, and a few chilli and tomato plants starting to move.

None of this is particularly visible during the daylight but I've gone out a few nights (during the brilliantly bright full moon) to find out what's going to town on everything.

So here's a list of the bugs, pests and otherwise i've noticed in the garden lately.

I've put out some snailbait so at least these aren't doing so much damage at the moment but boy there were a lot of them, some very sizable. I've had at least 15 killed in one large pot alone - no wonder the habanero seedlings kept disappearing. I might get one or two viable plants out of them, but they always grow so slowly ...

I don't know if these eat live things or just dead matter but there's some pretty big ones hiding in sheltered spots.

Seem to be everywhere, in large numbers. I was wondering what was eating the lettuce leaves since i'd put the snailbaits out and went out one night with a torch to see - whole lettuce leaves covered in dozens of the things eating big holes through them. And I also found them going to town on a lemon tree - doing a lot more damage than I expected which is more of a concern than the numerous lettuce. I've put out some beer traps with which i've had much success in the past but they don't seem to be going for them so much this year. So I resorted to a little fly spray just to help the leaves while they're very young although I don't want that to become a habit.

This was a new one. I've seen similar bugs hanging around the inside of the lettuce but not on citrus. I have a barely alive 'limequat' in a large pot which just sprang to life again a couple of weeks ago and I noticed something was hoeing into the rapidly advancing new leaves. One bug it seemed was doing all the damage. I'm keeping a close eye on this one since I fear this is it's last chance before it dies completely.

For some reason they've only gone for the lemon tree so far but they're making a mess of that. There's an ant colony in the half-barrel the lemon is growing in so maybe that's why since they seem to farm the aphids.

I hadn't ever seen these before moving to this house and have been waging war with them ever since. They thrive on leaf litter so one control measure is to clean that up. Eventually I found out a very weak solution of detergent worked well and eventually migrated from using a hand trigger spray to a pressure pump spray to a watering can to now just big buckets of slightly soapy water to try to get them. Only needs about a tablespoon of detergent for a 10 litre bucket and it's pretty devastating to ants too. I don't think i'll ever be rid of them but at least their numbers are kept in check if I keep doing it regularly.

I have some large coriander plants which have gone to seed - covered in large flower heads. These are doing a good job attracting bees although there are usually a few around here and there. One thing I noticed in Perth was a lack of bees - so much so it was a problem getting fruit to set - and it's nice to see that given the problems in other parts of the world the bees here are still quite numerous. There was even a swarm next door a few weeks ago.

Even saw a couple of ladybugs around which are not that common. One reason I don't want to spray too much ...

Well I saw one a few weeks ago. Nice surprise.

Blasted things keep running across my roof making a racket and hanging out in a large golden rain tree next to the house - generally smashing up the small stalks and making a mess. My roses this year are very spread out with long stems falling over (I didn't do a good job pruning I suspect) and one of the nicer ones broke in half. As a probably vain attempt to salvage it I put a couple of branches in some wet dirt, and the possums even ate the leaves off that while it was sitting on the ground. At least they don't do that too often. 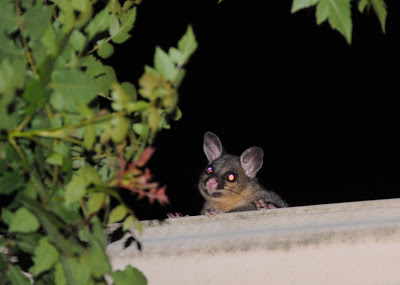