Had another stab at saving again today. Damn i forgot how tedious it is to try and make relatively nice looking GUI components, particularly when the layout toolkit seems to want to fight you at every stage ...

It's pretty basic but it should suffice for what I need. Actually this is the first post where I created the images using ImageZ itself, so it marks a bit of a milestone. 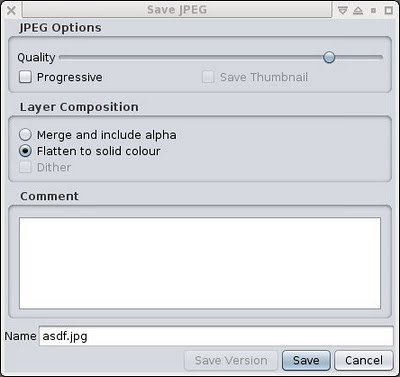 I haven't actually hooked up the comment stuff yet, but i've done it before and it's a matter of frobbing around with the metadata. Unfortunately it is in XML ...

I decided to leave in the RGBA support for JPEG files after reading the JPEG metadata specification for Java. Maybe nothing else will read them properly but it looks like Java will. But it defaults to flattening the image for JPEG files just to avoid confusion and i'll probably add a warning.

While doing testing I got really sick of the childish 'this file exists are you sure' crap (yeah no fucking shit sherlock!) and found I think a reasonable way to get rid of it. The file requester is used as normal to select the file to save to, and if you happen to select or enter a file that exists it just shows a warning in the bottom of the window and relabels the Save button to Overwrite. That's almost always what I want to do when I save over the same name. So the idea is not to interfere with typical use, but still let you back out if you truly made a mistake. Actually it lets you just type in a name from this window so you don't have to back out too far either. 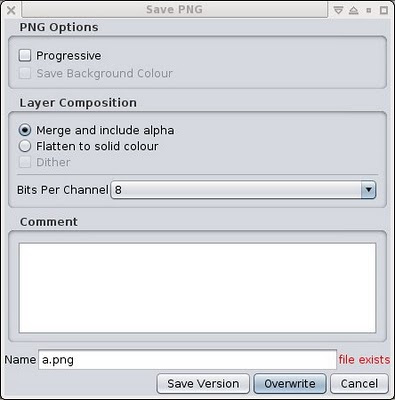 I'm still not sure about the `Save Version' button here - the idea is that it will just create a name automatically if there is a clash. But I have a feeling that without filesystem multi-version support it's just a good way to lose what you're working on too easily.

Unfortunately behind the scenes there's still a load of rubbish to deal with such as keeping track of the meta-data from the image loading, transferring meta-data between formats, and so on.

But with this weather I might be spending a lot of time inside ... sigh, really cold, wet, windy, shitty weather. And I hurt my foot doing something I can't remember although it's getting better quickly because i'm giving it plenty of rest. Both are at quite inconvenient times, I finally got council approval for my shed and I still have a lot of work to do getting the yard ready - and soon will have a hard deadline in which to achieve it.